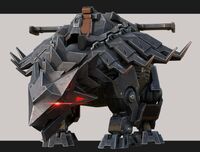 SPITZE is a large, imposing figure. Her alt-mode, a terran ankylosaur is heavily armored and rugged. Armed with a shield and mace, she came forth complete with a solar array that seems to be multi-purpose.

Spitze arrived as a mystery, crawling out of the sand at Alyon while the Autobots were searching for a missing Imager. It took three months, but eventually the conclusion came about that Spitze WAS Imager, heavily mutated by whatever freak spark storm went on. In theory, there's a second spark in her chamber housing, but isn't strong enough yet to be withdrawn and put into its own casing. Until then, Spitze is in control.

Nobody's really sure from where this Dinobot came; she sure doesn't act like a normal Dinobot either.

Just to help people in interactions with Spitze, the following things are noted:

>*live footage of a gold and silver ankylosaur apparently napping in the middle of a highway, blocking traffic on two lanes.*<

>*Footage shows people running, and a shuttle being rocked onto one side. The camera moves to show a gold and silver anklyosaur rubbing up against the shuttle, apparently using it as a scratching post. The shuttle tips over, the anklyosaur looks disinterested and continues on*<

>*Footage at the Pious Pools where the gardeners and tenders look confused as a large anklyosaur of gold and silver slowly backs its way into one of the pools, and submerges until its nose is the only thing above the oil*<

>*footage shows a few people admiring the small garden near the gates of Iacon, an anklyosaur noses its way through part of the exhibit, being oddly docile*<

>*The ankylosaur is shown in the simulation arena fighting whatever the program brings up. Nobody's exactly sure how it got the program running.*<

There's footage of a gold and silver anklyosaur asleep on a launch pad. A shuttle is nearby needing to be moved in position. A hesitant worker attempts to move it with a forklift, only for it to roll over completely, and stay asleep.

Several onlookers are dismayed to see Spitze walking through Iacon with someone's arm hanging loose, stuck in part of her shell. She has a few scorch marks but seems no worse for wear.

There's video from a group of civilians having some midday refueling, when an ankylosaur appears on camera, and stubbornly decides to go over and across tables instead of around them. Tables are broken, chairs are overturned, people are indignant.

>*footage shows an ankylosaur standing in the middle of the northern road to Retoris/Iacon, causing a traffic jam*<

Footage from Hot Spot shows an anklyosaur pulling a large panel up a sandy dune. The ankylosaur studies the panel, then stands upon it, causing it to slide down the dune. The anklyosaur then begins to drag it back up the dune.

City footage shows an anklyosaur in heated argument against....a mirror. There is much foot stamping and defiant shouting as onlookers give it a wide berth.