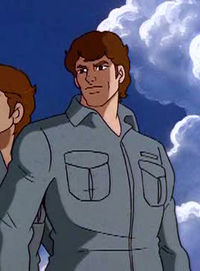 Patriarch William "Sparkplug" Witwicky and son Spike Witwicky witnessed world history when their oil rig was attacked by the Decepticons. Sparkplug briefly thought about volunteering to help the

Autobots, but the fear of losing another family member a mere three years after losing his wife led him to let someone else handle the new alien visitors.

This devastated Spike to no end. For a few moments after he and his father were pulled from certain death, Spike envisioned himself not as a "mechanic to be," but as a key player in helping the Autobots not only get familiar with Earth, but to defeat the Decepticons.

Just as Sparkplug's decision to help the Autobots led to enormous consequences (both good and bad with his family), Sparkplug's inactions caused a second rift in his family. Carly and Spike never hooked up - and as a result, Daniel never came to be. Instead of having one son idolize his father (Spike) and one son wanting nothing to do with him (Buster), both Witwicky brothers harbored minor resentments toward Sparkplug during their adolescence. Buster still saw Sparkplug as a distant figure, despite his father showing far more interest in his son's interests after returning home following the oil rig attack in 1984. Spike saw his father as someone who singlehandedly crushed his dreams of become something more than a mechanic.

The stable family environment did benefit Buster. Living in a stable home with a father who continuously encouraged his son's pursuits enabled Buster to prosper academically. He excelled in English, oftentimes surpassing Spike in reading comprehension despite being Spike's junior by five years. During his pre-teen and early-teen years, Buster relished opportunity to expose Spike's "average" intellectual abilities in front of friends and family.

Feeling more and more overshadowed by Buster's accomplishments, Spike began to drift. He routinely daydreamed of helping the Autobots, going so far as to visit the Autobots when they were in a Seattle mall, only to have Bumblebee politely decline Spike's offer to join the Autobots and help them fight the Decepticons. Realizing he would most likely earn a living as a mechanic, he graduated high school with barely a B average and enrolled in technical school. During this time, Sparkplug routinely chastized Spike for his aimlessness. Sparkplug justified his actions by pointing to the fact that Spike may take over his business in the not-too-distant future. Sparkplug's brother, Ron, routinely admonished Sparkplug's treatment of Spike, saying that he and his school rarely focus and nurture "average" students because so much focus goes to either the over-achievers, or the troublemakers.

Spike worked at his father's auto repair shop while in high school. For a few years, Spike cared little for the job, making common mistakes such as leaving the oil cap off of the engine during a routne oil change. As Spike moved into his early '20s, his resentment toward his father ebbed. He took on his duties with renewed vigor and by the time he was 21, he was second only to his father in mechanical abilities at Witwicky Auto. In 1995, Sparkplug suffered a major heart attack while at Witwicky Auto. While he made a full recovery, Spike took over general duties at Witwicky Auto, where he remains today. In 2011, Witwicky Auto was awarded Top Marks in Angie's List for places to service your vehicle and the company received its first A+ rating in the Better Business Bureau publication of Most Ethical Small Businesses - much to Sparkplug's delight. Elated that Witwicky Auto was well on its way of entering a second generation, Sparkplug retired (minus the few part-time shifts he continues to work), handing over full administrative duties to his son, Spike.

In his 20s, Spike met a woman by the name of Angela Dylan at a bar. While far from the best place to meet someone, Spike and Angela hit it off. In 1996, the two were married and have since had three children: Susan (16), Olivia (14), and David (11). Angela works as an office manager for a hospital and occasionally takes a bartending shift to earn extra money. Between jobs and children, Angela and Spike practically have to schedule date nights. While the two are close, both secretly feel that an essential "spark" between them is missing. It could be because they just never were "quite" the soulmates each had hoped, or it could be that the two have put so much work into their jobs and their family that at the end of the day when it's just the two of them, both have practically nothing left to give one another.

In 2016, Angela and Spike made a secret vow - that when their youngest child Olivia turned 18, they would amicably separate.

In 2019 Marissa Faireborn met Spike in a bar, and he hit on her. It was ugly.

Angela Hopkins grew up in a chaotic household - at age 11, she was the center of a messy divorce between her mother and father. Highly rebellious, she escaped into a world of heavy metal, and parties. After a brief flirtation with college, Angela dropped out and became a bartender. It was there where she met Spike. Sensing he was damaged as well, the two quickly grew close. Spike would stay and drink until Angela closed up, and the two would continue partying until Spike had to get up for work. This continued for months, until Spike's father suffered a major heart attack. The near-death of his estranged father caused Spike to quickly reshuffle his priorities. Angela reluctantly went along with Spike's new focus - opting to continue on with college. She eventually found a job in a hospital, and became an office supervisor. In 1992, the two married - and have since had three kids. While the two were initially close, the burdens of having three kids, plus Spike's repeated lapses into self-pitying moroseness about his missed opportunity to help the Autobots have created a distance between the two. As their youngest prepares to enter high school, Angela is starting to see her life in a post-Spike setting after their kids graduate high school and leave the house.

Named after Spike's mother, Susan gravitated to science at an early age. In addition to her love for science, she also found a love for board games and 80s goth/goth-lite music like Joy Division, The Cure, and Echo and the Bunnyman. Though she has a deep love for her mother and father, she's made it her mission in high school and college to obtain a future where she would never be an office manager or an auto mechanic.

Mischevious, precocious, and conspiratorial, Olivia quickly gravitated toward her father because of her repeated desire to "take stuff apart and learn about them." Olivia possesses a sarcastic sense of humor that can borderline on cruel. She incessantly loves teasing and tormenting her little brother. She's endured her share of groundings, but in the back of her mind, she always evaluates the punishment verses the reward, and usually for Olivia, the award wins out.

Warm, caring, and sensitive, David Witwicky is the youngest, and presumably last Witwicky family member for Spike and Angela. Early on, David showcased a vivid imagination and accelerated reading ability. David idolizes his uncle (author Buster Witwicky), who he routinely sends short stories. He wrote his first story at age 9, and had a mix of Disney-like innocence and a dark, Burtonesque whimsey. At age 10, David began to gravitate toward Disney movies like The Little Mermaid and Frozen. He also caught on to My Little Pony. His father became concerned at his son's interest in the "Brony" culture, and he routinely has tried to get David to show interest either in Spike's own profession, or at least more male-centric superheroes. To which David has expressed little to no interest. Despite the differences, Spike and Angela have been supportive in all of David's pursuits. Partly due to their love for all of their kids, but also because Spike wouldn't hear the end of it from Buster if he tried to turn David into something he isn't. David has been told his imagination is near-limitless. However, his family's financial means are definitely limited. And oftentimes, David wishes they could be living in a Tony Stark-style world, and not the world where dad and mom occasionally shuffle bills from paycheck to paycheck.

As a teenager, David began to gravitate toward the world of comics, especially Spiderman and X-Men. Taking comfort in characters like Wiccan and Hulkling, David decided to come out as gay to his family. At first, David's revelation shook Spike and Angela. Spike saw David's revelation as more of a failure of parenting on his end, rather than a natural state of things. However, after a few tense weeks, and with Buster's help, Spike came around to be a fully supportive dad. After all, he knew how much pain comes to a person when a dad isn't supportive of his son's interests.