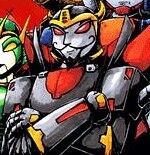 When the Planet of Junk began picking up Earth TV, Spec-Tor became obsessed with villainy and the balance of light and darkness. Believing evil was necessary to bring about good, Spec-Tor founded Evil, Inc, to harass Wreck-Gar, counter goodness, and bring balance to the Force.

Spec-Tor II was a Junkion super-villain in an alternate future dimension, minding his own business and spreading evil in his dramatically unique way. However, Unicron of this dimension needed a herald, so he plucked Spec-Tor from his world and made him an offer he literally couldn't refuse. Powering him up beyong belief, Unicron brought Spec-Tor to our TF Universe, where the first thing he did was hunt down the only Transformer who could possibly pose a threat to him -- this world's Spec-Tor. Ambushing his unsuspecting counterpart, he captured him and froze him in carbonite, hanging him in his lair as his favorite decoration.

Spec-Tor remains frozen in carbonite even with the disappearance of Spec-Tor II. He is currently hung in Spec-Tor II's quarters in the Disco Star.

With the destruction of the Disco Star in 2017, Spec-Tor's frozen body was destroyed.

Spec-Tor is inspired by a similar character of the same name from TF2k5, and is used with permission by the original character's creator.

Spec-Tor appears in Star-Wars-holographic form, blue-tinted with distortion lines regularly running through his image. "Angels," his image begins. "Greetings. My lost minions, I can't imagine how you must be suffering with me gone. I'm sorry for disappearing without warning… it seems that my Dark Master needed me with some urgency in another dimension, and he made me an offer I simply couldn't refuse. However, I was able to convince him to allow me this – one last message to my former underlings, and a data disc instructing my chosen successor on how to access the collected energies of the Disco Star. For, you see, this fully-operational battle station isn't just something shiny with which to pick up the ladies -- it is also a massive power collector. I had intended to use these energies for my own dark purpose but, alas. Instead, I need you to get this disc to Os-Kar, the only one of you I trust with this vast influence Do not, under any circumstances, let it fall into the hands of that imbecile Big-Time. He is as clumsy as he is stupid. He's great for inspiring drones to work faster, and for crushing the life out of mine enemies, but for this kind of work, [his holographic image imitates playing the piano] he's a little bit light. This disc contains my instructions and plans for the Disco Star and for our organization as large. See that Os-Kar gets it intact. Good Night, and Good Luck. May the Schwartz be with you!" Spec-Tor's image flickers off, and a small slot in the machine opens, revealing a small silver circular data disc.

Spec-Tor was once played by Marsh, who brought him to the MUX with 2k5 Spec-Tor's creator's permission, but alas Marsh was lost to use by marriage and WoW, and now Spec-Tor has no player. *snif*

In the Shattered Glass universe, Spec-Tor is a heroic Junkion who has broken free of Wreck-Gar's control and fights valiantly to stop him.