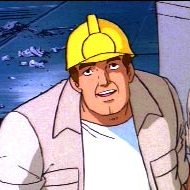 William Irving "SPARKPLUG" WITWICKY is a widower and a natural born mechanic who loves to take things apart or put them back together, and can fix just about anything. A rough, rowdy guy, Sparkplug has a deep, unspoken affection for his sons, but cannot understand why his boys don't share his interest for the practical things in life. Sparkplug sees the Autobots as potentially dangerous threats to be around and does his best to keep his family away from them. Never formally educated, Sparkplug relies on his instincts and basic mechanical know-how to survive.

William Irving "Sparkplug" Witwicky was born August 30, 1936, in Chicago, IL, to Margaret and Jeremiah Witwicky. Sparkplug was raised in a strict, fundamentalist household. Sparkplug was so eager to escape the hands of his strict, devout father that he lied about his age and joined the Marines in 1952 during the Korean War, where he earned the nickname "Sparkplug" and attained the rank of Sergeant while working as a mechanic on military vehicles. Captured by the North Koreans and detained as a POW, Sparkplug was forced to repair enemy equipment. However, he secretly sabotaged that same equipment, leading to personnel and material losses for the North Koreans. He was released after the armistice was signed on July 27, 1953.

Honorably discharged from the Marines in 1957, Sparkplug worked many different jobs around the world, including a stint as a ruby crystal miner in Burma until the coup d'état in 1962.

In 1969, Sparkplug married a lovely woman named Susan, and a year later his first son, Spike, was born. In 1975, five years later, their second son Buster Witwicky was born. For more than five years, the Witwicky family led an unassuming and altogether normal family life, replete with financial squabbles, late nights tending to nasty ear infections, and the occasional date night, babysitter pending. During this stretch, Sparkplug joked that he wanted an additional seven boys to make up an entire sports team. However, raising two boys five years apart quickly stamped out Sparkplug's half-joking dream. As Buster progressed from being a toddler to a kindergartner, Sparkplug found himself becoming more and more confounded by his younger son's eccentricities. Instead of devoting all of his energies to understanding his younger son's quirks, he usually found himself spending time with his more relate-able (and rambunctious) son - and letting Susan be with Buster. As the '80s dawned, the Witwickys were poised to live in middle class anonymity.

However, the Witwicky family was dealt a shattering blow in 1981 when Sparkplug's wife Susan died unexpectedly in a car crash, leaving Sparkplug a widower and single father. When Spike got older, Sparkplug worked out special arrangements to bring his teen son to job sites with him. Buster, however, too young to safely spend six months on an oil rig, stayed behind with Sparkplug's brother Ron and Ron's wife Judy. Even with little means at his disposal, he made a deliberate attempt to minimize the interaction between Spike, Buster, and their grandfather as he routinely chastised Susan and Sparkplug for being weak role models and for making their sons "soft" by their lack of phsycial discipline and their repeated encouragements for both sons to pursue their love of reading to its fullest extent. Sparkplug and his father's relationship grew increasingly strained when his (Sparkplug's) father chastised his grieving son after Susan's funeral, claiming Susan's death was a punishment from God for Sparkplug and Susan not imposing a stricter biblical code on their sons. He also warned Sparkplug against his continued closeness with his brother Ron, claiming Ron was deliberately defying god with his career path in stage and sound management for jazz and rock music acts.

The year 1983 was especially brutal for Sparkplug and his family, financially. That summer, the engine block in their family car cracked, forcing Sparkplug to purchase a new car. That winter, both Spike and Buster had multiple medical bills for colds, respiratory infections, and a broken arm. The final straw was reached when their furnace died. The mounting debts eventually came to head in early 1984 when the bank began forclosure proceedings on Sparkplug's house. Desperate for money, Sparkplug took the only job he could find that would enable him to recoup the losses from the past year: as a rig worker for an offshore oil company. Young Buster was sent to live with his aunt and uncle while Sparkplug managed to "smuggle" Spike aboard, convincing the lead foreman that the 14-year-old Spike was 16.

Patriarch William "Sparkplug" Witwicky and son Spike Witwicky witnessed world history when their oil rig was attacked by the Decepticons. Sparkplug briefly thought about volunteering to help the Autobots, but the fear of losing another family member a mere three years after losing his wife led him to let someone else handle the new alien visitors.

This devastated Spike to no end. For a few moments after he and his father were pulled from certain death, Spike envisioned himself not as a "mechanic to be," but as a key player in helping the Autobots not only get familiar with Earth, but to defeat the Decepticons.

Just as Sparkplug's decision to help the Autobots led to enormous consequences (both good and bad with his family), Sparkplug's inactions caused a second rift in his family. Carly and Spike never hooked up - and as a result, Daniel never came to be. Instead of having one son idolize his father (Spike) and one son wanting nothing to do with him (Buster), both Witwicky brothers harbored minor resentments toward Sparkplug during their adolescence. Buster still saw Sparkplug as a distant figure, despite his father showing far more interest in his son's interests after returning home following the oil rig attack in 1984. Spike saw his father as someone who singlehandedly crushed his dreams of become something more than a mechanic.

The stable family environment did benefit Buster. Living in a stable home with a father who continuously encouraged his son's pursuits enabled Buster to prosper academically. He excelled in English, oftentimes surpassing Spike in reading comprehension despite being Spike's junior by five years. During his pre-teen and early-teen years, Buster relished opportunity to expose Spike's "average" intellectual abilities in front of friends and family.

Feeling more and more overshadowed by Buster's accomplishments, Spike began to drift. He routinely daydreamed of helping the Autobots, going so far as to visit the Autobots when they were in a Seattle mall, only to have Bumblebee politely decline Spike's offer to join the Autobots and help them fight the Decepticons. Realizing he would most likely earn a living as a mechanic, he graduated high school with barely a B average and enrolled in technical school. During this time, Sparkplug routinely chastized Spike for his aimlessness. Sparkplug justified his actions by pointing to the fact that Spike may take over his business in the not-too-distant future. Sparkplug's brother, Ron, routinely admonished Sparkplug's treatment of Spike, saying that he and his school rarely focus and nurture "average" students because so much focus goes to either the over-achievers, or the troublemakers.

Spike worked at his father's auto repair shop while in high school. For a few years, Spike cared little for the job, making common mistakes such as leaving the oil cap off of the engine during a routne oil change. As Spike moved into his early '20s, his resentment toward his father ebbed. He took on his duties with renewed vigor and by the time he was 21, he was second only to his father in mechanical abilities at Witwicky Auto. In 1995, Sparkplug suffered a major heart attack while at Witwicky Auto. While he made a full recovery, Spike took over general duties at Witwicky Auto, where he remains today. In 2011, Witwicky Auto was awarded Top Marks in Angie's List for places to service your vehicle and the company received its first A+ rating in the Better Business Bureau publication of Most Ethical Small Businesses - much to Sparkplug's delight. Elated that Witwicky Auto was well on its way of entering a second generation, Sparkplug retired (minus the few part-time shifts he continues to work), handing over full administrative duties to his son, Spike.

Sparkplug has attended many book signings in support of his son, Buster.

Sparkplug is currently available for temping.