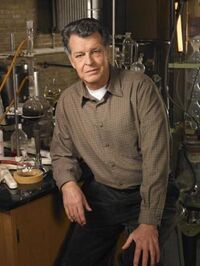 In Joe World, Sparkplug was recruited after the Korean War to join a growing team of globe-trotting special forces experts focusing in developing universal peace and security. In the 60s Sparkplug worked as a saboteur and developed spy gear for Colton's G.I. Joe forces, and in the 70s joined the Adventure Team as the group's resident mechanic while fathering two sons with beautiful fellow agent Susan Witwicky.

Tragedy struck in 1981 was Susan was killed in the line of duty by enemy agents. Grief-stricken, Sparkplug retired from field work in 1984, focusing his energies on raising his two young sons. While Buster proved to be remarkably resilient, Sparkplug grew increasingly worried as his oldest son, Spike, spiraled further and further into a deep depression. Finally, in 1986, Sparkplug admitted Spike to a mental hospital, where he remained for years. During this time, Sparkplug balanced his family life and work life by seeing Buster through college, visiting Spike while at the same time rebuilding and recruiting the alien robots found in a giant ship in Oregon. Seeing this as an opportunity, Major Sparkplug recruited Spike to help him in this endeavor, despite strong opposition from Spike's doctors.

Sparkplug's gamble paid off as Spike began to prosper in his new role of teaching the awakened Transformers about Earth.  However, actions by Falcon damaged Spike's progress, which was worsened with the Joes, including Spike, were kicked out of the Ark. Sparkplug convinced Ironhide to allow him and his son to return, secretly acting as a spy for General Flint in exchange for Flint's secret help protecting Sparkplug's sons.

Sparkplug continues working closely with the Autobots in assimilating to Earth culture, and reactivating the remaining offlined Autobots, including Optimus Prime. In a post retirement world, he routinely has coffee with Flint at a local mall and both reveal information they probably shouldn't reveal from the Joes and the Autobot end. Sparkplug has confided to Flint repeatedly about his fear of death - not necessarily for his own mortality, but the fear that if he's gone, no one else will be able to take care of his son. He secretly hopes that with enough close work, the Autobots may be willing to take over this task in the event of Sparkplug's demise.