This page is for the Apocalypse World universe version of evil Decepticon Soundwave. For his mellow Shattered Glass counterpart, see Soundwave (SG) 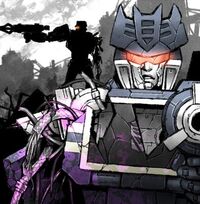 SOUNDWAVE has lost everything. Concerned more for the dead planet than anything else, he's withdrawn much what little society is left, an eon long sulk after the death of his tapes. While he still wears the factional colors, there is no need for him among the salvagers and the scroungers of the world. He is a mech past his prime, clinging to an age old hatred.

Soundwave served as intelligence officer during the war on Cybertron. He had the altmode of a communications relay tower, which allowed him to get as close to Autobot headquarters as the street leading into Iacon. There, he deployed his chest-dwelling minion Laserbeak who could snoop even closer. Laserbeak overheard talk of the Autobot mission to seek new energy sources off Cybertron, which prompted the Decepticons to intercept and board the Ark. During the fight aboard the Ark Soundwave easily fought off Jazz, Prowl and Sideswipe only to be kicked in the back by Ironhide. He then somehow got up again to be punched in the chest by Ratchet, whom he threw against a console. However, this battle was cut short when the gravity of a primitive planet forced both ships to crash land. Four million years later in the Earth year of 1984, the Transformers awakened and Soundwave was reformatted into a portable cassette player. He played an essential role in the generation of energon cubes and the formation of plans for a new space cruiser to return the Decepticons to Cybertron.

Soundwave's cassette player mode allowed him to dupe a grabby and none-too-questioning Spike Witwicky into carrying his shrunken form into Autobot headquarters, where he was able to deploy Ravage and record information on Earth's most plentiful resources. Though Ravage was captured, Soundwave escaped to report to Megatron.

After Ravage returned after being allowed to escape, Soundwave proved his loyalty to Megatron by warning his leader of Starscream's foolish attempt to take his life. During the subsequent battle at the launch site of the space cruiser, Sound deployed several tapes in Operation: Warfare (read: he wanted them to fight the Autobots). Soundwave served as helmsman for the space cruiser on its remarkably short flight from Earth, and alerted the others to Mirage's intrusion. Implacable in the face of destruction, Soundwave monotonally reported his failure to halt their descent while the rest of the Decepticons totally freaked out.

After the Decepticons established an undersea headquarters, Soundwave fooled the workers of a solar power plant into thinking he was a worker's tape player, even though he wasn't, which begged the question of how he managed to get inside in the first place.

After Megatron was seemingly destroyed, he chafed under the command of Starscream, whose inept leadership he was forced to endure. Their first sortie ended in comical defeat that saw Soundwave bowled over by Prowl as he ran away. When Megatron eventually returned in a scheme to steal Doctor Alcazar's antimatter formula, Soundwave happily latched back onto his master. After Alcazar deleted the formula from his own computer, Soundwave used his mind-reading talents to acquire the formula from the brain of Chip Chase.

Fire on the Mountain

During their mission in the Peruvian Andes to exploit the fabled Incan Crystal of Power, Soundwave and Reflector were ambushed by Brawn and Windcharger in mid-air. Brawn drove Soundwave head first into the side of a mountain. As Soundwave got up, he was knocked over by Brawn who had been blasted by Megatron. He got the Autobot back, though, firing sonic bursts directly into Brawn's head, then going after the Autobot with Megatron's gun mode.

Soundwave's mind-reading abilities came into use again when he scanned the brains of Grimlock, Slag and Sludge in order to determine their weaknesses.

“ I've been waiting a long time for this, you poor excuse for a sound system! ” — Blaster

One of Soundwave's most notable misadventures came in 1985, when, operating a plan conceived by Starscream, he brainwashed humans with ultrasonic vibrations inside the Decepticon-built night club Dancitron in New York City, leading to a confrontation with his Autobot Communications Officer counterpart, Blaster. This began a lasting rivalry between the two.

In 2004, NASA was attacked by Soundwave and his cassettes. They were run off by Steeljaw and Wa-n'Da, but not before kidnapping Professor Zimram Straussfrig, an expert in the field of advanced energy collectors.

He is one of the few who knew Megatron's true whereabouts when the Decepticon leader disappeared in 2013. When Megatron was injured by Optimus Prime in 2014, Soundwave returned to Decepticon City to watch over him until Megatron had fully recovered.

At the end of the war of information, Blaster and Soundwave fought to the last. Their hatred of each other had only increased during these last few days. Through their storied encounters and endless manipulations, the tragedy of Mute, the ambush at Riker's Falls, Soundwave's imprisonment, as well as his legendary escape, these items have built up a history, a legacy of two foes too evenly matched to garner a win. Even late in these days, at the fevered peak of the last few sweeps of the Cybertronian War, when Soundwave caught and interrogated six of Blaster's tapes to death...when Blaster destroyed Soundwave's tape ejector, forcing him to only watch as his minions, his only friends, waste away, unable to be protected by the Tape Commander's frame....all these things come to the inevitable moment. There is a secret, a secret in this wasteland of a world that simply cannot be shared. A secret someone will die for.

When Blaster and Soundwave clashed in response to a signal discovered emanating from an old production plant in Uraya, only Blaster walked away alive.

Soundwave is current head of the Decepticon Intelligence division.