Start a Wiki
The name or term Snarl refers to more than one character or idea. For a list of other meanings, see Snarl (disambiguation). 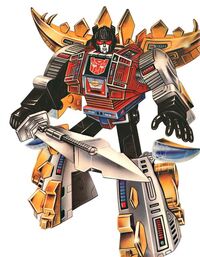 An Autobot of few words and fewer opinions, Snarl grudgingly follows the orders of Dinobot leader Grimlock and leaves the thinking to others. He's generally unhappy and a loner, and his uncommunicative nature only adds to his feelings of isolation. Only the thrill of battle can elevate his spirits. In fact, few of his comrades experience the joyous heights that Snarl attains while locked in mortal combat. But for him war is an all too brief respite from the twin devils that haunt his miserable existence: the ungainly dinosaur form Wheeljack has bestowed upon him and the knowledge he may be stuck on mudball Earth forever.

His unique design makes Snarl particularly useful in sunny, arid environments. The large golden plates protruding from his spinal assembly are solar collectors. Although he can operate without sunlight, solar energy can increase his strength tenfold and his endurance to a virtually limitless degree. A swipe of his tail can shatter a 20-foot concrete cube. His heavily armored hide makes him resistant to most missile fire.

Snarl's dependency on sunlight makes him extremely vulnerable to attack at night. Although he can use the same fuel the other Autobots use, he operates at only a fraction of his strength when he does. He is also very slow and his uncooperative behavior patterns sometimes hinder his effectiveness in dangerous situations.

Snarl, along with Swoop, were the second set of Dinobots created by Wheeljack. They fought the previous Dinobot group who had been tricked by Megatron into joining the Decepticons.

Soon after a climactic battle between Optimus Prime and Megatron, the Constructicons dug their way into the Ark in an attempt to destroy Teletraan I. Upon the sounding of the alarm, Snarl was among the Dinobots who drove the intruders outside the base. However, the Constructions unleashed their secret weapon by combining to form the mighty Devastator. Snarl was kicked by the giant, ending up hanging over the edge of a river of lava which then proceeded to burn his already damaged backside. It was not a very good day.

Snarl and the other Dinobots live in a cave near Mount St. Hilary.

Retrieved from "https://tfumux.fandom.com/wiki/Snarl?oldid=75413"
Community content is available under CC-BY-SA unless otherwise noted.