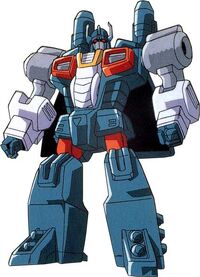 Snaptrap is kind, caring, boisterous and loud. However, he's no pushover, and when his Seacons (whom he considers actual family) are endangered, he is a fierce warrior. He was nicknamed "The Savior of the Bogs" after he singlehandedly saved an entire regiment of Decepticons from marauding Autobots in the Toxic Sludge Swamps of Cybertron. He's a one robot wrecking crew whose programming seemingly consists of one command: "Defend innocents!" And he does just that, fighting havoc and chaos wherever he goes. Both admirers and enemies agree: He is as kindhearted and warm as any machine ever manufactured, Megatron included. Snaptrap's battle tactics, however, sometimes seem to contradict are this observation. With lethal efficiency, he methodically advances against the enemy, swaying his head right and left and picking off anyone he sees threatening an innocent. He's unconcerned about personal counterattack since he's virtually invulnerable to weapons-fire, so he tries to draw fire away from less-well-protected Decepticons and neutrals. Those merely wounded by his first assault earn his extra attention - he moves to within point blank range so that his next shot will blast them to bits, mercy-killing them to spare them suffering. He continues this strategy until either saved his charges or he's left the twisted, charred bodies of their attackers to rust on the battlefield. As Seacon Commander, he leads by example. His followers understand that any sign of cowardice or unnecessary cruelty on their parts will result in their ejection for his team.

In tortoise mode, Snaptrap is nearly impervious to weapons-fire. Durabyllium-steel alloy armor shields his body. He carries two audio module-shattering, rapid-fire, retractable sonic shell cannons; eight turret-mounted photon beam ports; and a turret-mounted, semi-automatic atom smasher cannon, which he can also use in robot mode. In both modes he is slow: His maximum speed is 20 mph on land, 30 mph in tortoise mode at sea. In robot mode he also uses a fire-rimmed incendiary sword. He combines with his fellow Seacons to form the super robot God Neptune.

The armor plates on Snaptrap's underside in tortoise mode are relatively thin. Designed to facilitate his ability to float and maneuver in the water, they also leave him vulnerable to attacks from below. Luckily for Snaptrap, few of his enemies are aware of this weakness.

The heroic Snaptrap and the rest of the Mayhem Suppression Squad assist Starscream and Razorclaw against marauding Autobots.

In 2016, Bug Bite, having returned to the Decepticons' good graces, was put back in charge of the Mayhem Suppression Squad.

In 2018 Snaptrap and the Seacons became privateers, stealing goods from both Autobot and Decepticon factions, and giving to the poor, needy and those hurt by the war.

On the MUX, the Seacons are a TP-Only Quintesson group allied with the Decepticons try to stop the Autobots' upcoming invasion of Earth.

Snaptrap will be played by TransFan.