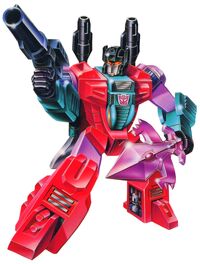 Snaptrap was nicknamed "The Butcher of the Bogs" after he singlehandedly scrapped an entire regiment of Autobots in the Toxic Sludge Swamps of Cybertron during a recon mission to that planet. He's a one robot wrecking crew whose programming seemingly consists of one command: "Destroy!" And he does just that, creating havoc and chaos wherever he goes. Both admirers and enemies agree: He is as cold-hearted and cruel as any machine ever manufactured, Megatron included. Snaptrap's battle tactics are brutal confirmation of this observation. With lethal efficiency, he methodically advances against the enemy, swaying his head right and left and picking off anyone he sees. He's unconcerned about counterattack since he's virtually invulnerable to weapons-fire. Those merely wounded by his first assault earn his extra attention - he moves to within point blank range so that his next shot will blast them to bits. He continues this strategy until either he's sent his foes running or he's left their twisted, charred bodies to rust on the battlefield. As Seacon Commander, he leads more by terror than by example. His followers understand that any sign of dissension on their parts will result in their destruction on his part.

In tortoise mode, Snaptrap is nearly impervious to weapons-fire. Durabyllium-steel alloy armor shields his body. He carries two audio module-shattering, rapid-fire, retractable sonic shell cannons; eight turret-mounted photon beam ports; and a turret-mounted, semi-automatic atom smasher cannon, which he can also use in robot mode. In both modes he is slow: His maximum speed is 20 mph on land, 30 mph in tortoise mode at sea. In robot mode he also uses a fire-rimmed incendiary sword. He combines with his fellow Seacons to form the super robot Piranacon.

The armor plates on Snaptrap's underside in tortoise mode are relatively thin. Designed to facilitate his ability to float and maneuver in the water, they also leave him vulnerable to attacks from below. Luckily for Snaptrap, few of his enemies - and even fewer of his so-called "friends" - are aware of this weakness.

Until 2013, Snaptrap was based with his fellow Seacons on the Quintesson starship Bellum, awaiting deployment to Earth. He is the field commander of the Earth Invasion Force. Prior to his attack on Earth, Snaptrap attacked an Autobot training regiment in the Toxic Sludge Swamps of Cybertron, slaughtering every member of the troupe. Two days later Snaptrap attacked a swamp in Georgia on Earth, tangling with the Dinobot Snarl as well as two Cobras in a Maggot.

In 2016 the Seacons attacked the Hydrax Spaceport and hijacked the Millennium Falcon.

Snaptrap soon renamed it The Hatemaker. He soon used the ship to attack the Central Spaceport in Ibex. Forced to retreat, he holed up in the sewers beneath Ibex, severely thrashing the first Autobot team that went after him.

Later that year Dal Matia enlisted Snaptrap to assist her against the combined forces of the Autobots and Decepticons in the Silent Grill. When Dal Matia was defeated, Silent Grill was destroyed. Initially buried, the Seacons were dug out and repaired by Snaptrap, who gave them new missions across Cybertron.

Prior to his death in 2019, the Fallen created the Dark Spark and gave it to Snaptrap as payment for his assistance.

Snaptrap spent most of 2020 in the Shattered Glass universe, but failed to acquire what he sought there.

According to his player, Snaptrap's voice actor is Michael Clarke Duncan.

Quintesson-occupied Los Angeles. A dedicated rescue effort to pull survivors out of Los Angeles was launched by Cobra and supported by Reverb. Nightlash, already inside the city, provides air support and diversion.

assist in the counter-attack, and the Decepticons take the opportunity to perform research and reconnaissance.

Snaptrap was played by dean for the Quintesson Invasion TP. As of 2016 he was taken over fulltime by TransFan.

Retrieved from "https://tfumux.fandom.com/wiki/Snaptrap?oldid=84513"
Community content is available under CC-BY-SA unless otherwise noted.