This page is for the evil Decepticon Snapper. 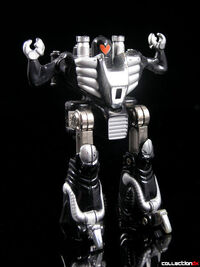 SNAPPER is a violent, meatheaded thug, no two ways about it. Like his commander Demonhead, Snapper is a practitioner of the ancient martial art Crystalocution, though his skills are basic and lackluster in comparison. Instead, he makes up for this by copious amounts of foul play, underhanded tactics, skullduggery, dirty fighting, general chicanery, and cheating. Snapper is the guy who will bring a gun to a fistfight, throw a vial of acid in his opponent's optics, and use any illegal hold he can dream up, just because he can. Absolutely full of himself, Snapper talks a big game and will do everything in his power to assert his dominance over those around him. Due to his lack of respect for authority, he was given to the Cronos mission in hopes he would be killed in action far, far away from Decepticon high command. More's the pity. His primary weapon in close combat is a polearm resembling a rake, with vicious curved spikes which give it the appropriate name "Wolf Teeth Rake". Fittingly as a member of the space exploration ship Cronos's crew, Snapper's altmode is an aerospace fighter with an alien design, reflecting the long millennia spent in uncharted systems.

Available for application as an OC. In the meantime, temped by Ty.