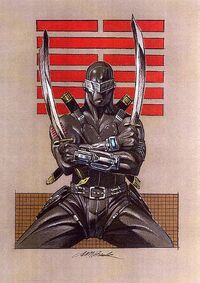 "Let's roll the dice, and ooh... snake eyes! Looks like you're going to die! Do you like my sword technique? I learned it in Japan. Pay attention as I slit you from throat to gullet. I like that word, 'gullet.' It's fun to say, don't you think? Oh, you're dead. Bummer. Ah, well, we can still have fun together! Here, give me your head..."

A disfigured and mentally unstable mercenary, Snake-Eyes is one of the more dangerous and mysterious members of the G.I. Joe Team. He served as a recon ranger in the jungles of Southeast Asia, but all that can be said after that stint is he went on a long sabbatical; most believe it was in Japan. Some say he was training with the same ninja clan that beget Storm Shadow. We know his fighting skills have become more efficient and deadly. Rumors surfaced that when he was recruited into the Joe Team by Hawk, he was hunting rabbits at the time... with his bare hands.

Snake-Eyes is a superb assassin and mercenary, and an expert in multiple forms of martial arts and is an expert swordsman and marksman. He favors using bladed and martial arts weapons to meet opponents in single combat. Snake-Eyes also uses various firearms and blade weapons his trademark weapons to being his twin katanas that he wears on his back, and his trademark Uzi.

Snake-Eyes came from a dysfunctional family consisting of him, his twin sister and their parents. Snake-Eyes was a quiet, withdrawn kid who prefered torturing animals than playing with other kids.

Before he joined the G.I. Joe Team, he was a soldier serving a tour of duty in World War III as a member of a Long Range Recon Patrol. Two men who would later become important in his life also served in the very same patrol, Stalker and Storm Shadow. The others were Wade Collins, Dickie Saperstein and Ramon Escobedo. He struck up a strong friendship with Storm Shadow, then known as "Tommy." The latter talked of his uncle's business in Japan that he would join after the war and was hinting there was a place for Snake-Eyes.

Throughout his time overseas Snake-Eyes treasured a photo of his sister, believing that so long as no harm came to it he would be okay. During a mission the LRRP was attacked and only Snake-Eyes, Stalker and Storm Shadow escaped. As they headed to be picked-up by a helicopter the patrol came under fire. Snake-Eyes was hit and the photo was damaged by a bullet. Believing Snake-Eyes to be dead, Stalker ordered the helicopter to withdraw but Storm Shadow charged out and saved Snake-Eyes's life.

When Snake-Eyes returned home he found no-one waiting for him at the airport. Four hours later a young lieutenant, one day to be Joe commander Hawk, arrived late to inform Snake-Eyes that his family had been killed when their car was hit by a stoned-out veteran. The veteran, who also died, was the brother of the future Father Cobra.

Snake-Eyes found life back in America difficult due to the public backlash against the war and the soldiers who fought in it. He was often spat at and called a baby killer by strangers. He left America for Japan and joined Tommy's family business - the Arashikage ninja clan run by Tommy's uncles, the Hard Master and the Soft Master, and Tommy himself, known as the "Young Master." Snake-Eyes entered into a rigorous life of training and concentration and proved even better than Tommy, but sometimes let Tommy save face in fights. However Tommy was always better at the bow, able to hear so well beyond the line of sight. The only way to refine the skill was to kill and Snake-Eyes was more than on board with this.

Snake-Eyes was growing in the favor of the Hard Master and one evening the latter taught him "Darkened Room" techniques known as "Blind Sword" when Snake-Eyes heard a third person in the courtyard. But the Hard Master didn't believe there was any danger and went behind a screen to continue the training, imitating someone and challenging Snake-Eyes to identify the impression. Suddenly an arrow came through the screen and killed him. The Soft Master rushed into the courtyard to see Tommy rushing away with a bow and assumed he was chasing the intruder. But the arrow was one of Tommy's and only he had the skill to aim by sound and force to fire it. However the dying Hard Master denied Tommy's guilt. Tommy never returned and the family business disbanded. Later they learnt that Tommy had become a Cobra follower using the family name "Storm Shadow." The Soft Master would for a long time believe that it was Tommy who killed the Hard Master, but had really been targeting Snake-Eyes. Many years later the truth would be learned.

With the Arashikage clan dissolved Snake-Eyes returned to America and took residence in a cabin in the High Sierras, with only the wolf Timber for company. Local rumors said he was a werewolf. Later Stalker and Hawk were putting together G.I. Joe and Stalker convinced Hawk to try and recruit Snake-Eyes. They eventually tracked him from the delivery of his army disability checks and found him coming back from hunting rabbits with his bare hands. They convinced him to come with them, leaving Timber at the cabin.

Snake-Eyes first encountered Ebony when she was putting cadets through a hand-to-hand refresher training. The men didn't take her seriously even after she rapidly overpowered Steeler. Snake-Eyes was next and she soon realized he was letting her win to save her pride. She was intrigued by him and went with him off post one evening. They became friends though she wanted more even when he said she reminded him of his sister.

Months later Ebony and Snake-Eyes were on a hostage rescue mission above a desert when their helicopter engine stalled and the pilots ordered a bail out. The helicopter started spinning, throwing one of the doors shut on Ebony's web-gear, trapping her. The helicopter was heading towards its fellow and Ebony told Snake-Eyes to get out but he instead tried to free her when the two helicopters collided. The aviation fuel ignited and a jet of flaming vapor tore through the window, hitting Snake-Eyes in the face. Ebony was knocked out in the crash but Rock 'n Roll told her how Snake-Eyes carried her clear of the wreckage with his face still on fire and his voice gone.

When Ravage landed in the Arizona desert in 2009, Snake-Eyes was sent to investigate. He witnessed Ravage's meeting with Professor Arkeville and Sephie Beller, and followed the three of them back to the Professor's lab before reporting the incident back to General Flint.

When Kamakura tried to infiltrate the Pit, Snake-Eyes was one of the Joes who spotted him and drove him off.