View source
This article is about The Decepticon pyro - for the Underworld mutant, see Smeltdown (Mutant). 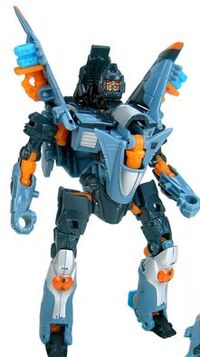 SMELTDOWN is a pyromaniac, but not in the 'deranged vandal' manner that most people associate with the term. His facination is with its destructive force, but also with the ideals of purification and rebuilding that can come with it. To him burning down the old and unwanted, such as the Autobots and their strongholds, means the Decepticons can raise their mighty empire upon the ashes left in the wake of the fires. This obsession with the cycle of destruction and renewal drives him with almost zealous determination for the Decepticon cause, laying waste to the enemy so Megatron can reforge what is conquered as he desires. In robot mode Smeltdown wields a pair of flamecasters that can melt through a slab of solid metal with a few minutes of exposure. In Sukhoi Su-35 Super Flanker mode can reach speeds of Mach 2 and has a range of over 3000 km. Armed with 30mm assault cannons, napalm bombs and special incendiary warheads that spread intense flames upon detonation, increasing their effectiveness in debilitating ground based troop movements. Also equipped with thermographic imaging and tracking hardware to help separate his targets from the flames around them. Despite his fascination with fire Smeltdown is not particularly resistant to it, meaning he can become victim to his own tendency to cause widespread conflagrations, as well as enemies that can take advantage of the fixation reducing his attention to other details.

<OOC> Smeltdown says, "For visual reference, Smelt's partially based on this guy rather than the 'standard' Seeker design http://tfwiki.net/wiki/Skyhammer_(PCC)"

A Seeker who's head resembles a flight helmet and goggles appears on-screen.

"Aerospace Incendiary Specialist Smeltdown, reporting in to earthside ranks. With the recent reclamation of our castle and turf on Cybertron, high command deemed my," he emits a not quite creepy sounding chuckle, "specific style of combat would be most useful on this organically infested planet."

He pauses to hold up one of his arm guns, and a spout of flame briefly flashes from the muzzle to illustrate his point.

"May many Autobots burn in Megatron's glory. For the Empire!"

He salutes, and the transmission ends afterwards.

Meanwhile Soundwave set us up the bomb, but...it doesn't appear to be the explody kind?