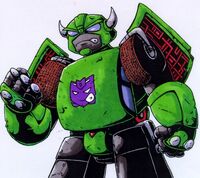 Slugbug was an unpopular door-kicker on Cybertron, whose altmode was a hydralic battering ram. When Slugbug got transferred to Earth, his teammates were anxious to get rid of him. Unwisely he asked their advice for choosing an altmode, and they told him about a vehicle company that assisted evil Nazis during WWII (Volkswagon), and a local creature known for its hard armored natural shell (a beetle). By the time Slugbug realized that a Volkswagon Beetle was not the fearsome war machine he'd been led to believe, it was too late, and he was stuck in the body of a minibot...

During the Timewarp TP Slugbug was swapped with an alternate future self where he wound up in possession of the Autobot Matrix of Leadership, proving in an infinite set of universes, just about anything is possible.

Slugbug is one of the only character on the MUX with "Crotch-Punch" as a coded attack.