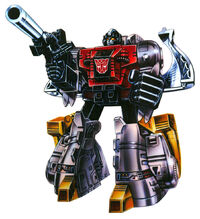 Sludge likes to make his presence known. A few steps of his incredibly lumbering legs and everyone within a three-mile radius can hear - and feel - that he's around. But his awesome physical appearance belies his unusually gentle and shy nature. Like his fellow Dinobot, Slag, he is not happy with the leadership of Optimus Prime. He feels, however, the Autobot cause is more important than any personal misgivings and so he rarely exhibits his feelings. Such is not the case when Sludge is fired to battle - he then becomes a terrifying, unstoppable force.

In Dinobot mode, Sludge can exert pressure up to 40,000 pounds per square inch with a single step, enough force to shatter a bridge or even crack a mountain. Only a handful of his comrades can match his immense strength and endurance. His armored hide can withstand all but the most powerful blasts. He's adept at operating in watery and swampy environments and in jungles.

Sludge is often victim to the calamities he causes. Often his fellow Autobots must dig him out of the rubble he's brought down upon himself. Perhaps if he were more clever he'd figure out ways to avoid these predicaments. He's very slow due to his huge bulk.

Sludge was developed, along with his fellow Dinobots Slag and Grimlock, after the Autobots discovered dinosaur bones in their volcanic headquarters. Inspired by the power of the prehistoric beasts, Wheeljack and Ratchet built a trio of Dinobots to add firepower to the Autobot forces. The Dinobots proved too dangerous at first, and Optimus Prime ordered Wheeljack to abandon the Dinobot project. Wheeljack continued improving the trio of titans in secret, crafting memory components that made them smarter and easier to control. When the rest of the Autobots were captured by the Decepticons at the Great Falls hydroelectric power plant, Wheeljack dispatched the Dinobots to free their comrades and destroy the Decepticons. The Dinobots succeeded in forcing a Decepticon retreat and were welcomed as members of the Autobot team. S.O.S. Dinobots

Sludge's greatest weakness was his sheer stupidity. Megatron exploited the Dinobots' weaknesses to turn them against Optimus Prime, Sludge merely choosing to follow whichever leader was "strongest". When Optimus Prime risked his life to boldly save Grimlock, the Dinobots rejoined him. War of the Dinobots

Sludge and his fellow Dinobots were called upon to stop a colossal tidal wave, The Ultimate Doom, Part 2 and afterwards, he and Grimlock helped repair a city that was destroyed during the terror. Countdown to Extinction

The Dinobots were in the Ark to fight off the Constructicons who came for Teletraan I. Sludge didn't recognize the new Decepticons, but was still willing to pummel them. When the Constructicons merged into Devastator, Hound created a giant hologram that distracted the beast and gave the Dinobots an advantage, forcing Devastator into a crevice of lava. Heavy Metal War

During a game of football, Sludge was tackled by Hound. The other Autobots later went on a mission to stop Nergill and the Decepticons at Washington, D.C., and when in dire need of assistance, Wheeljack called in the Dinobots as reinforcements. When they arrived, Sludge was pleased to hear Grimlock's order to "transform and destroy", and his powerful feet created earthquakes. Later, Sludge and the rest of the Dinobots were deposited on Negill’s home base of Sub-Atlantica, with instructions to act prehistoric. The Dinobots subsequent destruction made Nergill decide to detonate the entire base rather than let the Autobots have it, and everyone was forced to flee the vanquished Sub-Atlantica. Atlantis, Arise!

Once again, when the Autobots were overwhelmed and needed good brute force, the Dinobots were called in. This time at Quantum Laboratories where the super computer, TORQ III, began remote controlling machines to go on the offensive. Sludge helped out with the destruction of trucks, stomping them like ants. Sludge's long neck gave Optimus Prime a boost so that he could rescue Paul Gates who was held captive in his office. Day of the Machines

After Wheeljack's attempt to show off the Dinobots' finesse was a failure, (Sludge stepped on Slag's tail, unleashing his flame-breath, and it only got worse from there) they were sent to Dinobot Island, a place where the Dinobots would be at home. Sludge didn't mind, because he thought that more room was a good thing for a big guy like him. On the island, he rescued Spike from a lake and had a rock fly in his face (courtesy of Snarl), but with the other four Dinobots, he was cornered by Megatron and fell over a cliff, plunging into a tar pit. Dinobot Island, Part 1 Luckily, Sludge survived, and the Dinobots got out of the pit and outnumbered the Decepticons who had arrived, forcing them to retreat. Sludge then helped release the island's energy return the flow of time to normal. Dinobot Island, Part 2

When Bumblebee saw Decepticons at a public airport and Optimus Prime's squad was unavailable, Wheeljack sent in the Dinobots. At the airport, Sludge rescued Bumblebee from the incoming Blitzwing, and helped overpower Megatron’s forces, but when he recklessly changed into robot modes with his comrades, Sludge was vanquished by the Decepticons' assault. Though the Autobot doctors did their best, Sludge was no longer interested in doing labour for Optimus Prime and quit with his fellow Dinobots. When the Autobots were incapacitated by the deterioration of cybertonium in their bodies, Spike and Carly pleaded with the Dinobots to help steal some of the critical component from the Decepticons.

Instead, the Dinobots used the Decepticon space bridge to go to Cybertron, Desertion of the Dinobots, Part 1 where Sludge and the others were captured by Shockwave and reprogrammed into thinking that they obeyed the Decepticons. Shockwave stuck them down in the Cybertonium pits to mine more of the element. Luckily, they was rescued by Spike and Carly, and sent back to Earth with a healthy supply of cybertonium for the weakened Autobots. Desertion of the Dinobots, Part 2

When Shattered Glass Autobots led by Ultra Magnus attacked the Ironworks facility in Oregon, Sludge was there to defend it.

Sludge told to write a report. All he know is Slag is smarter then Slingshot. That all.

>*A text upload from Sludge.*<

All fight. Them Fishticons want Him Mangus Sword. Want stuff from Ironworks.

Have big fight. All go. Him Sendai go with Them Wreck-Gir and Mangus.

Me Sludge no feel Good.

Trible played Sludge in 1999. Sludge was played by CalihexInmate from July to August 2008. In 2014 Sludge is being temped by Zandar.