View source
watch 01:25
Jurassic World: Dominion Dominates Fandom Wikis - The Loop
Do you like this video?
Play Sound
This article is about the heroic, if obnoxious, main-universe Autobot - for his evil Shattered Glass counterpart, see Slingshot (SG). 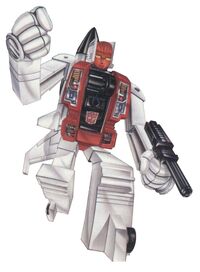 Slingshot won't ever win a Mr. Popularity contest. He's an incessant braggart, even when he's done absolutely nothing to brag about. He likes to take credit for the exploits of others, a thoroughly annoying habit that never fails to elicit animosity from his fellow Aerialbots. Most of the other Autobots are also aware of Slingshot's rotten personality and would prefer he removed himself from their struggle against the Decepticons. But, much to the surprise of almost everyone, Autobot leader Optimus Prime turns a blind optical sensor to Slingshot's faults, and instead is very supportive of him. Optimus Prime realizes, and he may be the only one who does, that Slingshot acts this way to disguise his own lack of confidence - he's the slowest and has the least range of all the Aerialbots and feels inferior as a result. Despite everything else, Slingshot is a loyal and hardworking soldier, qualities that Optimus Prime believes merit his understanding and trust.

As a white Sea Harrier jumpjet, Slingshot is a VTOL - a vertical take-off-and-landing aircraft, which means he can shoot straight up off the ground like a rocket and needs only a launching pad, not a long runway, to take off from and land upon. Although the slowest of the Aerialbots - his maximum speed is Mach 1.6 - he's the most maneuverable. He can virtually turn, in mid-air, on the proverbial dime. His range is 800 miles. He is also the best sharpshooter of the Aerialbots - his twin mortar cannons can hit a highway stop sign six miles away. In robot mode, he uses with extreme accuracy a neutron rifle, which shoots packets of neutrons at two hundred rounds per second. A short barrage can level a city block. He combines with his fellow Aerialbots to form the giant robot known as Superion.

Slingshot's unorthodox method of flying takes its toll on his equipment - he requires 50% more maintenance than his fellow Aerialbots. Their dislike for him often results in their leaving him behind in dangerous situations to fend for himself.

Slingshot was created from an old carrier drone along with the rest of the Aerialbots by the Autobots as Optimus Prime's answer to the newly created Stunticons. However, Slingshot quickly made it clear that he didn't care for Earth, the humans, or the other Autobots, and he certainly had no respect for his new commander, Silverbolt, whose fear of heights caused him to abandon Slingshot when Motormaster attacked him. Ironhide threated to install some humility programming into Slingshot via his fists on more than one occasion. However, Silverbolt was able to convince Slingshot and the other Aerialbots of the noble natures of the Autobots and humans. Slingshot even saved Silverbolt after the latter destroyed the original Key to Vector Sigma.

Slingshot was once a major fanboy of Starscream and the other Decepticon jets, and believed Megatron would be a real swell guy to have as a friend. He changed his mind while in Cybertron's past, after seeing Megatron casually destroy the young Orion Pax. After that, he declared that Megatron will never be able to run from the Aerialbots, and they won't stop hounding him until he is finished.

Soon afterwards, the Aerialbots helped spray Corrostop on the Statue of Liberty. When Perceptor was kidnapped by the Stunticons and Blitzwing, Slingshot led the pursuit, only for Air Raid and Fireflight to be zapped by Megatron's Lightning Bug. Later, when the Decepticons tried to destroy Lady Liberty to prevent the Autobots from mass-producing Corrostop, Superion soundly defeated Menasor and destroyed the Lightning Bug.

While in the Middle East to help the local governments discover why military jets have been dissapearing from hangers, the Aerialbots were lured into a trap by the Combaticons and Slingshot was buried alive in a cave by Blast Off. With his weapons console destroyed, Slingshot volunteered to act as a regular jet plane at an air force hanger in the hopes of uncovering the plane-nappers. He and Skydive got more than they bargained for when they were dismantled by the Decepticon-backed criminals and smuggled across the border.

Fortunately, they befriended a young boy named Hassan who identified Ali, the ringleader of the plane thieves who is helping the Decepticons rebuild the stolen planes into drone planes and has deposed the young ruler of the country, Prince Jumal. Hassan managed to recover all the parts removed from the two Aerialbots except for Slingshot's chest panel, but luckily Hassan borrowed the grill of Prince Jumal's Rolls Royce. During the subsequent battle between the Aerialbots and the Decepticons, their drone fighter jets and the Giant Purple Griffin, Hassan snuck on board the Griffin to try and steal a weapons console for Slingshot, but was trapped when the Decepticon fortress took off. Weaponless, Slingshot bravely attacked Onslaught and came to Hassan's rescue. With his weapons restored, came to his friends' aid by causing Bruticus to trip with his tow cable. Superion defeated the Griffin and the Aerialbots blew Megatron, Bruticus and oil prices away by destroying the oil fields beneath them. Afterwards, Hassan revealed himself as Prince Jumal and assured his friend Slingshot that he would always consider the young Aerialbot a Rolls Royce.

Shortly thereafter Slingshot returned the favor by giving Jumal a tour of the Ark.

Slingshot it currently based out of Autobot City, and is an important member of the Autobot's air defense.

In 2015 He was part of the crew on the ill-fated maiden voyage of the Spirit of Freedom.

A medic appears on the screen. "Slingshot has been repaired after being heavily damaged in a skirmish with the Decepticons. Ironhide, Air Raid, and Typhoon brought him in, and he'll be laid up for some time. No making him laugh or he'll burst his weldings."

December 19 - A Web of Confusion

Slingshot gets to ride the spider, Cuffs knocks Air Raid on his aft, Lifeline does a drive by, Air Raid hits on Trojan, Stormwind cements herself as the peanut gallery, and Ironhide causes a record number of spit-takes

"Hallo. Please land and disarm or I will order my brother and sisters to eat you."

Slingshot appears on the monitor. He glances back suddenly off to the side muttering, "Reports? I don't give reports. Why they making me do this?" Suddenly he snaps his attention back towards the camera.

"Uh, Slingshot reporting. Cuffs and I ran into Megatron in Haiti after going there to help Trojan do some cleaning up. Looks like there's more cleaning up to do since the Decepticons raided for some energon cubes and got away. Cuffs got pretty beat up too. We might need Superion next time we go down there. Anyway, Slingshot out."

SpikeWitwicky played Slingshot in a flashback to 1986.

Slingshot has a new player, and the MUX rejoices! That player is Shebakoby.