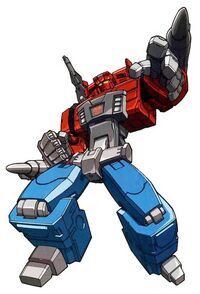 Slamdance is not a great warrior, but he is a brilliant journalist. The combined form of Grand Slam and Raindance, he combines the former's gravitas and vanity with the latter's mastery in data gathering. He can be a bit stuffy, but his dedication to presenting an accurate and unbiased account of current events is welcomed in his war-tossed times. He keeps the Autobots honest.

Grand Slam and Raindance re-connected with the Earth-bound Autobots in 1988, and was reformatted combine together to form Slamdance, as well as work closely with Blaster. However, unless summoned to Earth, they still primarily reports from Cybertron.

Slamdance covers the war on Cybertron, reporting to Blaster on Earth.

Slamdance is controlled by the players of Grand Slam and Raindance. Posts by him have been written by Bzero.