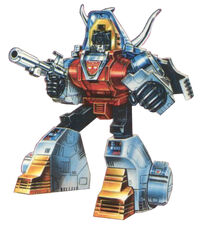 Maybe Slag enjoys his job too much - after all, a more sensitive Autobot might regret the waste involved in reducing an enemy to a smoldering pool of liquid metal. Not Slag. If his metal hide could take the heat, Slag would swim in the puddle to celebrate. Perhaps even more than his Dinobot brethren, Slag resents the authority of Optimus Prime, and he's not too keen on the other Autobots either. He's generally considered a disruptive force and has been known to get into brawls and turn his fiery breath against his comrades. Nasty and mean-spirited are perhaps the nicest things one can say about him.

In Dinobot mode, Slag can spew from his mouth a bolt of 3,000 degrees Centigrade flame up to 80 feet. He possesses enormous strength and can shatter a brick building with a single blow from his armored head. In Autobot mode he carries a high-energy laser rifle.

Slag is his own worst enemy. His misanthropic personality often persuades some of the other Autobots not to help him when he's in trouble. He's rash and not too bright, qualities which often put him in dangerous predicaments.

Slag was developed, along with his fellow Dinobots Sludge and Grimlock, after the Autobots discovered dinosaur bones in their volcanic headquarters. Inspired by the power of the prehistoric beasts, Wheeljack and Ratchet built a trio of Dinobots to add firepower to the Autobot forces. The Dinobots proved too dangerous at first, and Optimus Prime ordered Wheeljack to abandon the Dinobot project. Wheeljack continued improving the trio of titans in secret, crafting memory components that made them smarter and easier to control. When the rest of the Autobots were captured by the Decepticons at the Great Falls hydroelectric power plant, Wheeljack dispatched the Dinobots to free their comrades and destroy the Decepticons. The Dinobots succeeded in forcing a Decepticon retreat and were welcomed as members of the Autobot team. S.O.S. Dinobots

One of Slag's greatest weaknesses was his hostility, and Megatron was able to use this to his advantage, turning the Dinobots against Optimus Prime. A new pair of Dinobots, Snarl and Swoop, stalled the old trio until the unstable meteor nearby exploded. Witnessing Optimus Prime valiantly save Grimlock from the explosion, the Dinobots decided that he was a good, passionate leader, and turned against Megatron as his squad escaped. War of the Dinobots

When Cybertron was being pulled into Earth's orbit, Slag pitched in to help stop the destruction. He and his fellow Dinobots created a moat that successfully captured an incoming tidal wave. The Ultimate Doom, Part 2 After that, the Dinobots were called upon to fight against Devastator. Heavy Metal War

Hound and Bumblebee had trouble teaching Slag and the other Dinobots how to play football. However, when the Autobots needed help to stop the Decepticons and King Nergill's attack on Washington, D.C., the Dinobots responded quickly. After the battle, Slag pitched in by using his fire breath to repair the Washington Monument. He came to Sub-Atlantica with the other Autobots, where he raised hell with his fellow Dinobots. Atlantis, Arise!

The Dinobots' powers proved invaluable when they needed to save Optimus Prime from rogue vehicles. Slag transformed into triceratops mode and melted them down. Day of the Machines

While Wheeljack attempted to show off Grimlock's newfound finesse, Slag bumped into Grimlock and caused him to run amok. Then Sludge stepped on Slag's tail, and Slag instinctively breathed fire, scorching the Ark's computers. Afterwards, the Dinobots were sent to a new island that Bumblebee and Powerglide had discovered so they could master their abilities. Slag liked it, and thought that it'd offer room to move and stumble around. After practicing his "fire stuff", Megatron arrived and using fear, led a pack of dinosaurs to push the Dinobots into a tar pit. Dinobot Island, Part 1 However, they managed to get out, and Slag used his fire breath to get the tar off his comrades. Dinobot Island, Part 2

Slag was sent with the four other Dinobots to an airport with Decepticons in the vicinity, despite his dislike of everything. Breaking into their secret hideout with Snarl, Slag then melted Starscream's null-ray, to the Seeker's horror, and when he was dogpiled by Thrust and Thundercracker, threw them into a plane. When the Dinobots carelessly reverted to robot mode, an explosion knocked them down. Back at the base, Ratchet, Hoist and Wheeljack were able to repair them after countless hours of work. But after the Dinobots heard Optimus send them out for another mission, they had enough. Slag was sick of taking orders and decided to take orders from Grimlock only, and the Dinobots left the Ark. However, when Carly informed the Dinobots that the Autobots were low on cybertonium, Slag refused to help out, but Grimlock dragged him to Cybertron anyway, since they would be away from the Autobots. Desertion of the Dinobots, Part 1 When they reached Cybertron, Slag rammed Shockwave and then tried to turn him into a chew-toy. For this, the logic-driven Decepticon altered the Dinobots' memory circuits and put them to work in the Cybertonium Pit. Two squishies ended up saving them. Desertion of the Dinobots, Part 2

Slag remains one of Grimlock's most bull-headed Dinobots, operating out of a cave near Mt. St. Hilary.

"Me Slag fight Little Prime. Me Slag WINNING but told to leave. Slag not happy!"

<< Slag leans against the wall in Medical. >>

"Slag fight Little Prime and get Hot Cube back. Someone tell Hot Cube that cube not good to transform to. Him no move or see or....."

After trailing off because he forgot what else to say continues, "Slag break nail and want manicure."

Slag has been available for application since October of 2012. In the meantime he is temped by Scourge until 2015, and then taken over by Bzero in 2018.