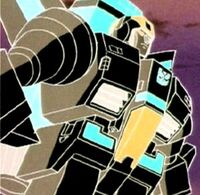 "I am a warrior, not a scientist."

SKYFIRE was originally an explorer during the Golden Age of Cybertron, but was lost in a blizzard over a prehistoric Earth, and was buried in the northern ice cap for eons. Large and well-armed, strict and utterly lacking in compassion, Skyfire enjoys combat, and is all-too-happy Optimus Prime initiated warfare while Skyfire was offline. While still nominally a Decepticon due to his friendship with Starscream, he is very unsure of their cause, and is considering defecting to the Autobots.

In his spacecraft mode he is one of the fastest and most maneuverable of the Decepticons, despite his large size. He can reach speeds of up to Mach 5 in atmosphere, and can easily reach orbit and beyond, where he can use his faster-than-light systems to travel the stars. In this mode he is armed with proton missiles and paired particle beams. In robot mode, his large size allows him to wield a double-barreled energy cannon, that operates by using two beams of opposite charges to create a tremendous explosion at their point of intersection.

His major weakness is that as much as he loves combat, he was never built to be a warrior; aside from his size and speed, his physical abilities, especially his fragile armor, are a liability in combat.

On Cybertron before the war, Skyfire was a scientist and explorer working with Starscream. Together they investigated an uncharted planet (Earth), where they failed to find any signs of intelligent life. Skyfire wished to scrutinize the planet further, and moving in close enough to the planet a polar wind storm swept him up and buried him beneath the Arctic ice. Starscream searched for his friend, but was unable to locate him and returned to Cybertron alone.

At the beginning of the Shattered Glass TP, Skyfire was still frozen beneath the Earth's North Pole. Rescued by Professor Arkeville, Ravage, and Sephie Beller, Skyfire has joined the Decepticons on Earth, although he seems lukewarm about their decision to protect the people of Earth.

In 2013, Skyfire was moved into Decepticon Aerospace by Deathsaurus, as befitting Skyfire's new status as a Decepticon warrior. In May of that year, Skyfire encountered positive-polarity Buzzsaw, who initiated a discussion with him that brought out Skyfire's reservations about the Decepticons. Skyfire went to meet Buzzsaw, positive-polarity Skyfire, and Goldbug, in an attempt to work out his shifting allegiances.

Shattered Glass Skyfire is a TP Character played by Carrie.