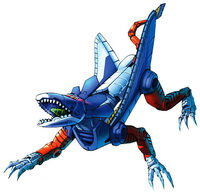 "The worst failures can never be forgotten."

Humble and self-deprecating, SKY LYNX feels eternal shame. He was once Lieutenant Commander of Optimus Prime's grand and sinister Autobot army, but after suffering a humiliating defeat at the hands of Wheelie, he tendered his resignation. He is in bitter exile, which he himself enforces, with no hope of finding redemption.

Sky Lynx's space shuttle form transforms into two bestial components: a winged cat mode and a reptile form. Each half can be operated independently. Curiously, due to the subspace generators installed within, the interior of his combined shuttle mode is three times the volume of his exterior.

In space shuttle mode, Sky Lynx has interplanetary travel capabilities. He can reach speeds of 30,000 mph and has a range of 40,000,000 miles. In dino-bird mode, he has a maximum speed of 250 mph and a range of 3,000 miles and can shoot a stream of fire from his mouth. In puma mode, he can leap up to 1.5 miles at a time. In all modes, he has great strength and is impervious to all but the most powerful artillery.

While Sky Lynx is quite powerful, his eternal shame limits his usefulness to the Autobot cause.

The Predacons were once students of Doctor Razorclaw, but an attack by Sky Lynx destroyed Tyrest University and killed Headstrong and Tantrum. The rest of the Predacons fled to the Manganese Mountains, where they hunt Sky Lynx and wage a guerilla war against the Autobots.

After suffering a humiliating defeat at the hands of Wheelie, he tendered his resignation. He is in bitter exile, which he himself enforces, with no hope of finding redemption.

Since his defeat by Wheelie, Sky Lynx remained hidden in the Manganese Mountains, feeding on the occasional stray Decepticon that dared cross the area but otherwise avoiding Autobot/Decepticon affairs.

Since Alpha Trion's return to the Autobots, Sky Lynx has tentatively returned as well, offering to serve as the Old One's personal transport. The Old One has largely ignored Sky Lynx's requests.

Sky Lynx is former Lieutenant Commander of Optimus Prime's grand and sinister Autobot army. However, he now has little military or political power.

Because of Sky Lynx's powerful stats, he's only available to be temped by an admin for the TP.