View source
watch 01:54
Obi-Wan Finale - The Loop
Do you like this video?
Play Sound
The name or term Sky Lynx refers to more than one character or idea. For a list of other meanings, see Sky Lynx (disambiguation). 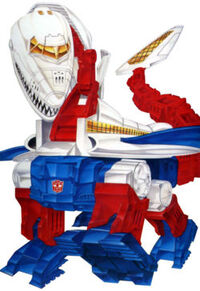 Sky Lynx is a mass of silvery steel cables ready to spring into action at a moment's notice. He seethes with explosive energy, rarely being able to stand still for more than a second. If he has nothing better to do, he will transform from one mode to another just to keep busy. When he's in action, instinct seemingly takes over. He moves with a fluid feline grace, and with a purposelessness that befits one as fearless and daring as he. He basks in the glory of battle. He believes himself superior to many of his fellow Autobots, a feeling that he thinks is justified by his high rank and prodigious fighting skills. He exhibits this feeling by his physical behavior: He rarely touches the ground to stand on the same level as the other Autobots. Usually, he's either flying above them or else he's perched on some structure so he can loom over them and make them look up to him. In his puma mode, he will leap from building to building, tree to tree, and hilltop to hilltop rather than travel on the ground. Many of the other Autobots resent this behavior, which often causes problems when Sky Lynx tries to command others. But generally, Sky Lynx is admired by his fellow Autobots for his versatility, skill, and bravery. In the middle of a war, these are the qualities that count.

In space shuttle mode, Sky Lynx has interplanetary travel capabilities. He can reach speeds of 30,000 mph and has a range of 40,000,000 miles. In dinobird mode, he has a maximum speed of 250 mph and a range of 3,000 miles. He can shoot a stream of fire from his mouth and hit a target up to 3 miles away. He generally uses this mode to fly in suborbital space and his shuttle mode to fly in orbital and outer space. He is, however, far more maneuverable and effective as a fighter in dinobird mode, so he will sometimes revert to this mode in outer space. In puma mode, he can leap up to 1.5 miles at a time. Rear-mounted rocket thrusters can propel him up to 40,000 feet in altitude, allowing him to intercept and attack Decepticon jets. In all modes, he has great strength and is impervious to all but the most powerful energy beam weapons and artillery.

Sky Lynx is prone to wasting fuel due to his habit of constantly moving even when he has no reason to move.

Sky Lynx suffered under Megatron's tyrannical rule and became nothing more than a sideshow in the fighting pits. Defiant to the last, Sky Lynx faced every foe brought before him, providing dignity in death to his former comrades-in-arms and old friends alike, and demolishing any Decepticon foolish enough to end up squaring off against him. Carrying more than just the physical battle-scars of each encounter, Lynx meticulously kept the names of every Autobot or Neutral who offered such information up to him, considering himself a living memorial to those departed. Every action was performed in the hopes that one day he would get a chance to bring the former Gladiator, Megatron, into the arena to end it once and for all.

28 October 2013 - Sky Lynx was brought out for another fight to appease Megatron and the Decepticon masses. It was a horribly one-sided affair -a staged execution- in which the Autobot, Axel, led a team of neutral combatants against the Autobot Commander. The fight was part of a plan, though, and Axel informed Sky Lynx of Bumblebee's plan prior to allowing Sky Lynx to kill him and the other Neutral combatants, who had all agreed to die assisting the cause.

29 October 2013 - Sky Lynx catches a Decepticon Technician off-guard while undergoing mild repairs in anticipation of his next fight. The technician, Crank, met an untimely end as a result and graciously donated his data-cores. Anticipating the worst, Lynx backed up the names of those fallen in battle, as well as Bumblebee's plans, and had an Autobot-friendly technician, Twidget, begin dispersing the information to other Autobots in captivity.

November, 2013 - Bumblebee, with the help of Sky Lynx, Grimlock, Jetfire, and Springer, rallied the Autobots for a daring raid on the Decepticon Space Bridge. On the third and final transport of Autobots to their new home of Nebulos, Shockwave blasted the Space Bridge, almost destroying it, and instantly killing almost 40 elite Autobot warriors, leaders, and scientists. However, the Space Bridge remained intact and Bumblebee and the rest of the Autobots were able to escape to Nebulos. While on Nebulos, Typhoon presented Bumblebee the Autobot Matrix of Leadership, which was recovered from Megatron. Typhoon and Perceptor presented the Matrix of Leadership to Bumblebee. He accepted and was awarded the title of Prime.