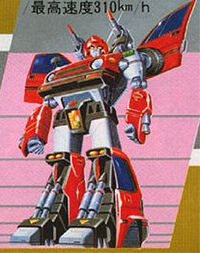 SKIDS is a complete sociopath, unable to really understand or care about the existence or feelings of anyone other than himself. This makes him perfect to oversee the Omega Doom project, because the prospect of wiping out all life on Cybertron gives him a certain quiet thrill. He couldn’t care less if he was the last Autobot alive – he despises his allies almost as much as his enemies, and looks down on everyone else as being far too stupid to live. He’d have wiped out the population sooner if he’d had the chance, and now, with Omega Doom, he might finally have his opportunity.

Skids has an enormous memory storage capacity. He can record visual information virtually instantaneously, and has been known to scan an entire college library's collection in two hours. In Autobot mode, he carries a liquid nitrogen rifle, which shoots a stream of the super-cooled element up to 600 feet. He also uses an electron blaster, which emits a burst of 20,000 volts and can short-circuit virtually any mechanical foe. In his new Honda City Turbo mode, his brakes, by far the best among the Autobots and courtesy of his own genius, can decelerate him from 50 mph to zero within 25 feet. Of course, such sudden stops aren't too good for the well-being of any possible passengers, but, again, Skids doesn’t really care.

Skids isn't very fast in his new Earth mode, however. His lack of caring and personality leaves him with few allies should he find himself in a dangerous situation. Often, he can be trapped into letting his guard down when distracted by something that piques his scientific curiosity. Otherwise, all he does to relax is watch Decepticons melt in the Iacon Smelting Pools.

Skids recently acquired an Earth altmode in case he gets transferred to Earth, but since he's busy overseeing the Omega Doom project, it's likely he's going nowhere.

With Wheeljack AWOL, Skids is busy overseeing the Omega Doom project, and is unlikely to be seen in public during the TP unless someone wants to temp him.

Skids transformers into a Honda City Turbo. With Wheeljack AWOL, Skids is head of Autobot Science, as well as Construction & Engineering.

Evil Skids is available for temping, should anyone have interest.