View source
This article is about the heroic Autobot theoretician - for his evil Shattered Glass counterpart, see Skids (SG). 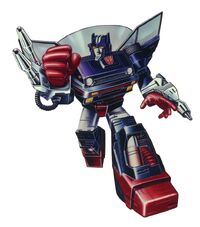 Skids had a tendency to bump into things, which, at speeds of 60 mph, could be a very unhealthy habit. It's not that he was reckless... he was just a bit of a daydreamer. His analyzer circuitry was frequently pondering some arcane data about Earthen life forms rather than the Decepticons' latest attack. Usually he could rouse himself out of his daze before it's too late, as evidenced by the screeching of his suddenly applied brakes when he's in his car mode. Given his former career on Cybertron as an anthropologist and researcher, he considered his new home - Earth - to be one vast laboratory of limitless opportunity. In fact, it would have been perfect if it weren't for the war's interference. Often, his findings were of invaluable assistance to his fellow Autobots. Nonetheless, sometimes other Autobots wondered if Skids knew who they were fighting. Sometimes Skids wondered, too.

Skids had an enormous memory storage capacity. He could record visual information virtually instantaneously, and had been known to scan an entire college library's collection in two hours. In Autobot mode, he carried a liquid nitrogen rifle, which shot a stream of the super-cooled element up to 600 feet. He also used an electron blaster, which emitted a burst of 20,000 volts and could short-circuit virtually any mechanical foe. In Honda City Turbo mode, his brakes, by far the best among the Autobots and courtesy of Wheeljack's genius, could decelerate him from 50 mph to zero within 25 feet. Of course, such sudden stops weren't too good for the well-being of any car, including Skids.

Skids wasn't a very fast car. His daydreaming often put him in very dangerous situations. Often, he could be trapped into letting his guard down when distracted by something that piqued his scientific curiosity.

Skids of Nova Cronum was below-decks when the Ark crashed, and wasn't rebuilt and reactivated until 1985. Skids was then part of a strike force that was sent to stop the Insecticons from ravaging a human farm, only to meet with failure. Apparently injured in the battle, Skids underwent some repairs by Hoist upon return to Autobot Headquarters, where he responded incredulously to Bumblebee's report that he had retrieved robotic insecticide from the planet Floron III to deal with the Insecticon threat.

Later, Skids was part of a team sent to investigate bombs that were raining down on a city from a football stadium (the work of the Triple Changer Blitzwing). Blitzwing, however, had the stadium surrounded by a massive "Zone Defense" maze built by the Constructicons, and while attempting to traverse it, Skids crashed into Prowl and was driven over by tank-mode Blitzwing. Skids and the other Autobots' remains were then gathered by Scrapper, who built a throne for himself out of them. These Autobots were soon rescued and quickly rebuilt, and participated in the crises that ensued as Blitzwing, Astrotrain, Megatron and Devastator vied for Decepticon leadership. Following that skirmish, Prowl opined that Optimus Prime was the greatest leader in the universe, which prompted himself, Skids, Bluestreak and Tracks to form themselves into a throne for Prime; Prime refused to sit, saying that thrones were for Decepticons — he'd rather roll.

Skids was formerly CO of Autobot Science on Earth. He was killed by the Fallen in 2019. Later that year he was resurrected by Bad Mort and had to be killed again.

Skids transformed into a tiny Honda City Turbo. He was XO and then CO of Autobot Science.

Skids is no longer available for application. He was once temped by Typhoon.