View source
This article is about the heroic Decepticon Terrorcon - for his evil counterpart, see Sinnertwin.

Sinnertwin is a heroic Decepticon Terrorcon from the "Shattered Glass" universe. 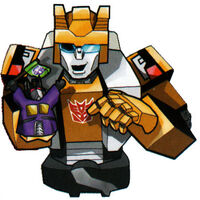 Before Optimus Prime started his war of conquest, Sinnertwin was Cybertron's most well-known and talented puppeteer. His puppet shows were popular with beings from planets all over the galaxy ranging from little protoforms all the way to royalty. He now fights as a part of Megatron's quest for peace, in the hopes that he and his puppets can someday entertain the masses once again.

Sinnertwin transforms into a Cybertronian orthrus. He carries a small pistol in robot mode and a Rocket Grenade-Launcher and Flame Cannon in beast mode. He combines with the other Terrorcons to form Abominus.

Sinnertwin and the Terrorcons are among the ranks commanded by Cyclonus on Cybertron.

Sinnertwin and the Terrorcons continue to patrol Cybertron, protecting its civilians from Junkion assault.

Sinnertwin is available for temping in the Shattered Glass TP.