This page is for the evil Decepticon sentry. For his heroic Shattered Glass counterpart, see Sinnertwin (SG). 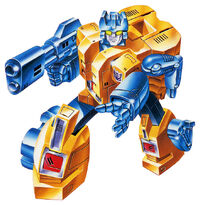 Like his fellow Terrorcons, Sinnertwin is a horrific insult to nature itself. Sinnertwin frequently patrols the Terrorcons' lair with the hope of finding anything unfortunate enough to be alive in his presence. Then comes the killing, and what with his multiple heads and sadistic nature, this is not something one would like to witness. Ironically, he's terrified of small creatures.

Sinnertwin transforms into a Cybertronian orthrus. He carries a small pistol in robot mode and a Rocket Grenade-Launcher and Flame Cannon in beast mode. Sinnertwin can combine with his fellow Terrorcons to form Abominus.

Sinnertwin and the Terrorcons were among the ranks commanded by Shockwave on Cybertron.

Sinnertwin and the Terrorcons continue to patrol Cybertron unless specifically called to Earth. During the Dweller seige of Polyhex, Sinnertwin was made into an energy vampire by the Trans-Organics. Captured by Cyclonus, he was eventually cured by Starscream.

Sinnertwin is available for application.