View source
The name or term Silverbolt refers to more than one character or idea. For a list of other meanings, see Silverbolt (disambiguation). 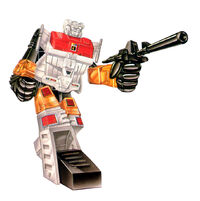 Silverbolt is scared of heights. It is this one trait, above all else, that determines the rest of his behavior. He projects the image of a brave, grimly determined warrior, befitting his role as Aerialbot Commander. In truth, he is just that. But it is a constant struggle for him to maintain this persona, to never falter or show any sign of emotional weakness to those he leads. Helped by the sleek, aerodynamic jet form that makes him appear to be a natural-born flyer, Silverbolt knows that everything about him belies even a hint of the existence of his phobia. And, in fact, no one is aware he has this problem, except Optimus Prime. It is for that reason the Autobot Commander selected Silverbolt to lead the Aerialbots - Optimus figured if Silverbolt felt responsible for the welfare of others, he'd have less time to worry about himself. Given that Silverbolt is an excellent leader, Optimus was right.

In Concorde jet mode, Silverbolt can reach Mach 1.9 and has a range of 4500 miles. He carries on his underside an electrostatic battery, which allows him to strip electrons from air molecules as he's flying and store them. He can then direct this stored charge through his nose cone as a powerful bolt of electricity. He's capable of storing and releasing up to 150,000 volts at a time. He's especially effective in lightning storms, due to their abundance of charged particles. He carries an electrostatic discharger rifle in robot mode that has the same capability. He combines with the other Aerialbots to form the giant robot known as Superion.

As long as Silverbolt is busy leading or fighting, he's fine, but when he's simply flying, particularly by himself, his fear of heights begins to manifest itself. The effect can be devastating; he might start flying wildly, go into a tailspin or even crash.

Silverbolt was constructed out of a low-flying cargo transport vessel, which was modified to resemble an Earthen Concord SST jet liner. He was later given life by Vector Sigma, along with the other Aerialbots, then returned to Earth with the Autobots via Omega Supreme. It was soon discovered that Silverbolt had a crippling weakness: an intense fear of heights, due to his low-altitude origins. Conversely, he was the only Aerialbot who wasn't a complete jerk. Because of this, Optimus made him commander of the Aerialbots, reasoning that it would give him something to worry about other than his acrophobia. He proved worthy of this role when he persuaded his mutinous teammates to help the Autobots protect humanity, by showing them how Sparkplug was able to disregard his fatigue at will due to his concern for Omega Supreme's well-being, something robots cannot do.

As the combined forces of the Autobots and Aerialbots sent the Decepticons into retreat, Silverbolt bravely went after Megatron and destroyed the original Key to Vector Sigma, despite his great fear of heights. As he fell, he was saved at the last moment by Slingshot, who was impressed by his courage.

Silverbolt is third in command of Autobot Aerospace, under Jetfire and Sky Lynx.

>*Hey It's Silverbolt, Boy does HE look messed up!*

"Silverbolt here." *He then waves away a medic for the moment* "The Aerialbots and I got word that Megatron had taken over O'hare International. We couldn't exactly organize until we got word that Starscream had arrive in system and was linking up with Megatron. All five of us immediately flew out to O'hare at that point and tried to drive them out of the airport. Air Raid was fine against Starscream, but I was getting trashed by Megatron. Thankfully, I kept Fireflight and Skydive in reserve since we're no match for Starscream and Megatron on our own. We formed Superion and Megatron put his plan into action, apparently, attempting to hold the humans hostage. From what I remember of it, taking human hostages only makes Superion mad, so he stunned Starscream, and hit Megatron with two of his heaviest weapons.....his Electro-static Stress Fracture Cannon and then attempted to drive megatron's head through his aftplate. *Silverbolt chuckles slightly at that* Megatron was knocked unconcious and starscream had to carry him off. Afterwards, we tried to help the humans out of the Sears Tower, and Air Raid held it up as much as he could While Jetfire was able to drive off Starscream and Coldsnap while Spike and a couple other humans, one of them being Destro, helped the humans out of the building.

I'm really not going to sugarcoat this, the Aerialbots and I got trashed. Superion got lucky in defeating Megatron and with Starscream back in the mix, we're going to have new problems."

By the way, Jetfire. Thanks for towing us back to the med bay. We wouldn't have made it on our own.

>*Spinny disappears, followed by a rather charred Silverbolt on energon support*

Silverbolt here. Heard CNN report on Megatron's starship landing in Kansas. Flew out to stop him. Formed Superion. Took Anti-matter cannon full blast. Aerialbots will be out of action until further notice.

>*The camera pans down to show the extent of his damage....Silverbolt has a hole in his chest, clear through to show the table behind him before the screen blip out*

SIlverbolt here. Spike and Tonka had a pretty good idea when it came to attacking the cruiser, so I went with it. The Aerialbots and I gave Starscream, Megatron and later on, Skywarp, something huge to focus on, namely Superion, while Tonka went in and tried to disable the cruiser and possibly destroy it. From what I remember from Superion, a few minutes after he got in, G.I. Joe arrived and started giving the rest of the seekers what for in tanks and missile carriers. In the Melee, One of the missile carriers even took out Starscream. In the end though, Tonka gave the mission accomplished signal and the Aerialbots and I, and Dust Devil, who arrived late, bailed out of there, as did the Joes, before the Cruiser went nuclear.

Tonka, You did one bang up job in the cruiser. From what I heard though, there was a Joe in there with you. You should let us know his or her name so he's not forgotten. SIlverbolt out.

Silverbolt here. On a normal patrol, Slingshot and I encountered Starscream and Thundercracker near the Grand Canyon. Rather than having them stick around, Slingshot and I engaged them. I wasn't doing quite so well against Starscream before I hit him with one of my larger lightning bolts, which seemed to scramble his circuits and bring him down. Slingshot took down Thundercracker, just in time to have him land on Starscream. However, during our battle, Starscream did mention that there was an energy signature while yelling at Thundercracker. The next day, however, Slingshot ran into Windshear, whom seems to have me marked for some strange reason.

I'm going to ask everyone to step up patrols around Metroplex and to check the canton for any energy signatures. Better for us to get it than the Decepticons.

Slingshot and I detected decepticons at an east coast power plant. I detected Starscream and Convoy making another energon raid out of there. I took on Starscream while Slingshot took on Convoy. In a pretty brief battle, I was KO-ed by Starscream and they got away with the energon. I'm lucky that Slingshot was able to carry me back to the repair bay.

Silverbolt here. We had a visit from General Abernathy who wished to see Optimus Prime, but since Optimus was on Cybertron, Spike gave him a tour of Metroplex. I ran into them both in the command center, where I proceeded to sit down and talk to him about a good number of things. Two things came up during our discussion that I figured Optimus and Ultra Magnus would want to take a look into. First of all, and this concerns all Autobots. From what General Abernathy said, the Decepticons and Cobra have joined forces. While this disturbs me, we still can't just march into the nation of Cobra Unity due to Humans' opinion of Autobots. We still can't display ourselves as conquerors of this world, like the Decepticons do.

The second part would be a joint radio channel on a trial basis. Instead of going through political channels when there is an emergency in the world and the Joes need us, or vice versa, Blaster and various members of the Joe Comm team create a channel where Joe Command can contact us directly, as well as Autobot Command can contact them directly as well. That way we don't have to constantly monitor their communications and they don't have to monitor ours. This would, again, be on a trial basis.

Abernathy said he would return, but Optimus, He really does need to speak to you.

After discovering Sparkplug confused and disoriented, Spike and Buster face making a decision about their father's fate.

In a previous meeting, General Abernathy and I spoke of a GIJoe base that was destroyed outside of the Cobra Unity border, contrary to what a news reporter said a few days ago (+bbread 10/46 (G.I. Joe invades C.U.?)). A day or so later, Slingshot and I did a fly over of said base, along with Sideswipe who did telemetry after linking up with Teletraan, finding that the Joe base was WELL outside of the Cobra Unity border. The closest any of the Joe equipment made was a mile or so outside of the border. I was challenged at the C.U. border as we did our flyby, but the garrison was so focused upon me that they didn't see Sideswipe, and I didn't really want to get into a firefight.

Yesterday, after I signaled General Abernathy over the EDC channel, he came by here and I gave him the data in one of Blaster's flash drives with all of the data we accumulated for the Joes. Hopefully this will aid the Joes, and promote building a stronger alliance with them. Cuffs, arriving at the end of this meeting, gave the General a ride back to G.I. Joe Headquarters.

In hindsight, While I admit that this will build a stronger alliance with the Joes, I do fear if the UN finds out that I gave the data to G.I.Joe, I might have committed us to the struggle between GIJoe and Cobra.

Blackbolt loves to fly. From the moment he came online, he took to the sky, and would never land if he could help it. Optimus Prime put him in charge of the Aerialbots, hoping to give him some sense of responsibility, but Blackbolt couldn't care less about his teammates, as long as they stay out of his way in the air.