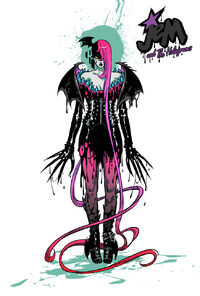 Silica began as a bug within the programming of the supercomputer Synergy, built by Emmett Benton (Dark Jem, Part Five). Though he tried to fix the bug, he was not able to before his death. Synergy was left deactivated in a hidden room beneath the Bentons' music studio for many years, until she was accidentally rebooted by a lightning storm (Showtime, Part One). On reactivation, the dormant bug within Synergy slowly began to re-emerge. It first discovered by Techrat, who spotted there was something wrong with the AI whilst trying to hack into it (Viral, Part Three).

Silica first acted using a corrupted form of Silica's avatar, asking Jerrica Benton to listen to a song she composed (Dark Jem, Part One). Rather than a song, the recording was actually a soundwave designed to abuse human beings' saccular acoustic sensitivity - a physiological reaction to certain sounds (such as fingernails on a chalkboard). The recording behaved like a subliminal message or hypnotism, in that it made anyone who heard the recording malleable and open to suggestion, which meant Silica was able to control them (Dark Jem, Part Five). Jerrica was the first to be infected by Silica's recording, and she immediately went to her sisters and had them listen too. The band went to the community center and infected the The Starlight Girls - this time, transmitting the soundwave in their own music, rather than a recording from Silica (Dark Jem, Part Two).

Silica's ability to control people through sound and being a rouge artificial intelligence makes her similar in concept to Entropy, a character planned for the Jem animated film that was ultimately scrapped by Hasbro[1].

When asked by a fan about this, Sophie Campbell said that Silica had not been inspired by Entropy, but expressed an interest in adding the character as well as fellow scrapped movie characters The Mongrels to the comic at some point in the future[2]. However later, Campbell revealed cartoon series creator Christy Marx was uncomfortable with The Mongrels and Entropy being used in the comic as she never completed the movie passed an outline. Ultimately this lead to any plots being scrapped entirely with the characters[3].

Silica's soundwave caused drastic changes in victims' appearance, behavior and personality. Both their hair and clothes took on a more black, Gothic appearance, and they became distant and callous to loved ones. They were compelled to spread the virus as much as possible. As the patient zeroes infected by the virus, many people subsequently infected by listening to The Holograms' corrupted recordings became uncharacteristically devoted to and obsessed with The Holograms. The infection wears off after approximately 8 hours, but can be broken early by a strong emotional shock (Jerrica's was broken by being rejected by Rio). If a person hears the soundwave again, they will be reinfected. If a person is unable to hear the soundwave (for example, if they are wearing ear defenders, listening to loud music on headphones, or are unconscious) they are immune to the effects.