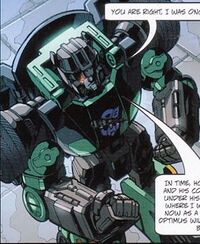 "I'm a survivor, and one day Optimus will learn what a mistake he made by crossing me!"

Although nearly as capable as his twin brother Sunstreaker in the combat arts, Sideswipe is far less cold-blooded about it. He thoroughly relishes engaging an opponent in a fight to the finish, and will use any dirty underhanded tactic he can think of to come out on top. On his homeworld of Cybertron this conduct extends itself to the rest of his lifestyle: getting what he can out of life, enjoying it to the fullest, and cheating to get the rest. His defection to the Decepticons hasn't changed his behavior, just his cause - now instead of doing everything for himself he does it for the sake of freedom for all. Personal safety takes a backseat to his reckless, but brave actions.

In Decepticon mode, Sideswipe's two arms can be used as piledrivers. Each exerts 8000 pounds of force upon impact with up to five impacts per second, making him particularly useful in close combat and for breaking through fortifications. A rocket back-pack can sustain him in the air for two minute spurts before refueling is necessary. When launched, two shoulder-mounted magnesium phosphorous flares can each be seen from a distance of 18 miles on a clear night.

If it weren't for his rash behavior, Sideswipe wouldn't have any serious weaknesses. But as he often acts without consideration of the consequences and takes a special delight in plunging into extremely dangerous situations, Sideswipe, more than any other Decepticon, finds himself being patched together by Chief Medical Officer Hook. Naturally, he takes his injuries in stride.

Sideswipe was once one of Optimus Prime's elite. In time, however, he saw that Prime's philosophy was warped and his concern was more for himself than anyone else under his command. After an ambush where Sideswipe was left for dead by his 'comrades,' Sideswipe defected to the Decepticons.

Sideswipe is currently involved in the battle to repel Junkion invaders.

Sideswipe has a scar from when he was left for dead by his comrades. He wears it now as a badge of honor, seeing himself as a survivor who will one day make Optimus Prime learn what a mistake he made crossing Sideswipe.

Sideswipe is available for temping. Sideswipe has dibs.