Start a Wiki
The name or term Sideswipe refers to more than one character or idea. For a list of other meanings, see Sideswipe (disambiguation). 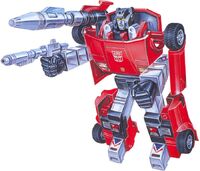 Although nearly as capable as his twin brother Sunstreaker in the combat arts, Sideswipe is far less cold-blooded about it. He thoroughly relishes engaging an opponent in a fight to the finish, and will use any dirty underhanded tactic he can think of to come out on top. Back on his homeworld of Cybertron this conduct extended itself to the rest of his lifestyle: getting what he can out of life, enjoying it to the fullest, and cheating to get the rest. His exile to Earth hasn't changed his behavior, just his cause - now instead of doing everything for himself he does it for the sake of freedom for all. Personal safety takes a backseat to his reckless, but brave actions.

In Autobot mode, Sideswipe's two arms can be used as piledrivers. Each exerts 8000 pounds of force upon impact with up to five impacts per second, making him particularly useful in close combat and for breaking through fortifications. A rocket back-pack can sustain him in the air for two minute spurts before refueling is necessary. When launched, two shoulder-mounted magnesium phosphorous flares can each be seen from a distance of 18 miles on a clear night.

If it weren't for his rash behavior, Sideswipe wouldn't have any serious weaknesses. But as he often acts without consideration of the consequences and takes a special delight in plunging into extremely dangerous situations, Sideswipe, more than any other Autobot, finds himself being patched together by Chief Medical Officer Ratchet. Naturally, he takes his injuries in stride.

Sideswipe was part of the initial crew of Autobots aboard the Ark when it crash-landed on Earth four million years ago. He awoke along with his fellow Transformers in 1984, with both he and brother being reformatted into Lamborghini sports cars. Sideswipe loaned Optimus Prime the use of his rocket pack when the Decepticons nearly escaped from Earth with a starship full of Energon.

When investigating tremors that were shaking the Autobot base, Ironhide's scanner found some interesting objects inside a rock wall. Sideswipe, using his piston-like arms, helped Brawn remove the rock wall and found a cave full of dinosaur bones, the discovery of which would lead to the development of the Dinobots.

Sideswipe once disguised himself as Breakdown in order to stop Megatron's evil plan, along with four other Autobots.

Sideswipe remains one of Optimus Prime's most reliable warriors on Earth. In 2013, Sideswipe was bitten by Windshear and infected with the Dweller virus. Incarcerated by Cuffs and treated by Nitro, Sideswipe seemed to be responding to Jetfire's cure, enough so that Bumblebee loosened Sideswipe's restraints. Unfortunately, this allowed Sideswipe to escape, and he wound up with the Decepticons for 'treatment.'

He joined the Decepticons while under the influence of the Dweller, and was only later recovered and cured by the Autobots.

Arcee had been picking up a low band data transmission signal coming out from Thunderhead Pass in the border regions along Iacon. We went to sweep around in a patrol and located a weak signal being broadcast in a repeated cycle. It's language wasn't in any immediate databases, human or Cybertronian. Arcee haphazarded a guess it might be ancient Cybertronian.

The ground was weak in the area around it and with some pressure we found an exposed area that had a small crashed shuttle. Likely cargo shuttle. Shuttle's in bad shape and pretty mauled, but might be salvageable. We were joined by engineer Twidget who took stock of it. Inside the shuttle there was a body, executed and shot in the back after an internal firefight. Shuttle would have the space for two or three in it under normal circumstances. The blast seems to have been a close range Null Ray attack. A medic can probably confirm it. This reeks of Starscream to me. All the fun shoot 'em ups. Arcee recovered a data crystal and Twidget found some electronics that might be salvageable to get records from. But for now it's been taken back to Iacon for inspection along with the body.

On patrol in the Manganese Mountains, Sunny (that glitch of a bro of mine) got a distress call from a civilian outpost being attacked by some Cons. At least a squad of 'em. We got there quick and went to brawl the place up. I of -course- slagged more Cons than Sunny did. Getting rust in your old age Bro. Get less wax and buff, more time in the simulators!

Was a small civilian area, with at least ten occupants and facilities to support them. The engagement with the Cons resulted in the squad disengaging, three Cons scrapped and two running away with their tailpipes between their afterburners. The place was messed up and it's in the Manganese Mountains without support so if the civilians got away they're not going to get far. Requesting assistance in recovery operations and dispatch of search and rescue team to try and locate any survivors. Me and Sunstreaker will be going through the area to try and see anyone we can dig up until reinforcements arrive. Also we have the three dead Cons set aside in case there's anything useful from salvage.

Retrieved from "https://tfumux.fandom.com/wiki/Sideswipe?oldid=80921"
Community content is available under CC-BY-SA unless otherwise noted.