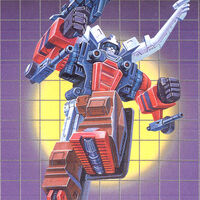 Shrapnel is the quiet type, preferring to let his work speak for him. As leader of the Earth-based Insecticons, he is always at the center of a massive web of information, monitoring electronic communications and passing intercepted information off to his fellow Insecticons. He is a master hacker, and there are few systems, Cybertronian or otherwise, into which he cannot crack. He especially loves to infected enemy computers with dormant viruses that he can activate at just the right time to disable a chain-reaction of vital network components. All in a day's work for the Insecticon's shadow cyber-warrior.

Lights and monitors winking out as systems go suddenly silent are the trademarks of Shrapnel's presence. When he's done his job right, his victims never even see him - he's a ghost who ravages their facilities and makes off with their data, leaving them defenseless and in the dark. While he's not a vengeful mech, it does give Shrapnel a private sense of pride to be able to do his part in disabling the Autobots' war machines, limiting their effectiveness against civilians and Decepticons. That knowledge is reward enough - Shrapnel needs no further praise from his peers or superiors.

In insect mode, Shrapnel can use his twin antennae to generate an electric burst of up to 40,000 volts. He can also use his antennae with enough precision to hack into and control virtually any electrically-run device - from a pocket calculator to a small factory. He can fly up to 50 miles. In robot mode, his antennae can, in the proper weather conditions, attract massive bolts of lightning from the sky to augment his own electrical-generating capacity, releasing that power through his hands. For times he can't avoid combat, he also carries a grenade launcher that shoots a 30 pound steel ball that splinters into thousands of razor-sharp spikes in mid-air.

Shrapnel's preference to work behind the scenes limits his effectiveness as a field commander, and his reluctance to get his hands dirty sometimes leads him to plan too conservatively and miss opportunities for bold, decisive strikes.

In 2011 Shrapnel was aboard the Nemesis, helping to monitor and protect Earth.

In 2016, Shrapnel and Kickback travelled to Cybertron to assist operations there, but were killed coming back aboard the Seizer.

Shrapnel usually served as Venom's Second-in-Command. When Venom was trapped on Cybertron, Shrapnel was in command of the Insecticons on Earth.

Shrapnel is dead, and therefore no longer available for temping.