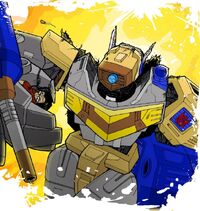 SHOCKWAVE is a Decepticon whose primary skills are at relations between organisms, and he usually works as an ambassador between the Decepticons and their allies, along with his aide Fistfight. A wizened leader, he is usually calm and patient, except when he lets his emotions get the better of him. While Shockwave is no scientist, he is an intelligent scholar and skilled in both psychology and repair. Like most Decepticons, he's more than willing to put his life on the line to save humans or the innocent. Although his fighting techniques are entirely defensive, he's more than capable of putting a hole through any Autobot if need be.

Shockwave is ruled by his emotions, and he isn't shy about it. He believes that passion and sentiment are what make Cybertronians more than mere machines. He burns with fury at the Autobots’ atrocities, and shudders in fear of what his enemies might unleash on the unsuspecting people of Earth. As a laser gun, Shockwave can emit lethal beams of energy from anywhere on the electromagnetic spectrum: gamma rays, X-rays, visible light, infrared rays, radio waves, etc. He can fly in his laser gun or robot mode. He is remarkably fuel efficient, primarily because he has an internal nuclear reactor that can create large amounts of energy from small amounts of fissionable matter.

Because Shockwave so often runs with whatever emotion he is feeling, believing his instincts give him his edge, he can be easily manipulated by those who know how to push his buttons. This can have devastating consequences when he is in command of large numbers of Decepticons or negotiating a delicate treaty with a foreign power.

Shockwave was a fellow scholar like Megatron, and was one of the first to join his crusade against the Autobots. His passion and feeling are an inspiration to the newer troops.

In 2006, construction on Dinosaurer secretly began on Cybertron by the Constructicons with help from Octane and under the direction of Shockwave. Dinosaurer was an experiment granting sentience to wild creatures of Cybertron. Dinosaurer's gestalt-sized altmode was just an extravagance on Scrapper's part.

Shockwave helped lead an attack on Iacon which successfully destroyed the Autobots' launchpad. He has since been an active commander, keeping Cybertron safe against Autobot evil.

When the Autobots launched the Ark to invade Earth, Shockwave was aboard the Nemesis when it gave chase. He's currently one of the Decepticon leaders on Earth.

My fellow Decepticons, I am overjoyed to report that our mission was a success! The Autobots' launchpad, from which they were to launch an intergalactic reign of destruction, has been destroyed! But let us not grow complacent. There is no doubts that, as soon as they have completed shifting blame among themselves, they will once again commence work on their destructive campaign. We cannot allow this to go unchallenged! We must hasten work on the Nemesis, even as we interfere with their own efforts! Take heart, Decepticons! Victory is yet at hand!

The Ark launches from Cybertron to attack Earth, but the Nemesis gives chase.

Shockwave is a TP character and was originally played by Bzero and then taken over by Dean.