Serpentor was the product of a conspiracy within Cobra to create the perfect soldier. A cabal of Cobra scientists led by Dr. Mindbender and Destro raided just about every tomb to contain history's greatest warriors. They scrounged every scrap of DNA they could that would serve as the genetic blueprint of this super soldier. Thanks to Mindbender's genius, Serpentor was imbued with the memories and experience of these legendary men.

Serpentor possessed acute military genius, courage, daring, charisma, political knowhow and fighting prowess that easily overshadowed Cobra Commander's. His creators neglected to take into consideration that the warriors from which Serpentor's DNA come from also happen to be cunning and ruthless leaders with huge ambitions. In Serpentor's blood, it called forth in him the glory of conquest... the conquest of the world.

The true origins of the man known as Serpentor have never been confirmed by the world's intelligence community. Accounts of Serpentor's "birth" come mainly from captured agents of Cobra, and these accounts seem fantastic. Even so, there is some evidence to support these claims. What follows is mostly based on rumor and the belief of several Cobra witnesses.

The Cobra scientist Dr. Mindbender had an incredibly ambitious idea. To assure Cobra's success, the organization needed a great warrior to lead it into battle. But, instead of trying to find such a man, why not create him? Mindbender was undoubtedly a genius, but his scientific methods went far beyond what any reputable scientist would attempt. He postulated that by using cloning technology combining the DNA of several ideal candidates, a new, perfect soldier could be created. But instead of using existing genetic materials, Mindbender would combine the genes of history's greatest warriors. Cobra Commander was willing to let Mindbender attempt it, and authorized the use Cobra's resources to that end.

With the help of Destro and the Baroness, Mindbender broke into tombs, museums and mausoleums to find the remains of history's most famed soldiers. Among these men were Julius Caesar, Napolean, Attila the Hun, Alexander the Great, Hannibal and Genghis Khan. Once that was complete, Mindbender set up a laboratory in the Museum of Antiquities in the Cobra-controlled town of Springfield. Highly advanced computers and medical equipment combined the dead men's DNA into a single pattern that would give the warrior the best mental and physical potential of all the great soldiers. He encoded the pattern into a lifeless, clone body.

To give the new being memories, Mindbender simply entered data into the brain as one would a computer -- with the help of the late Dr. Venom's Brain-wave Scanner -- and historical fact became several lifetimes of memories. In addition, Mindbender connected himself to the scanner to instill a loyalty to Cobra in his creation.

In the midst of the final stage of the project, the G.I. Joe team staged an invasion of Springfield. The Joe team member Ripcord had been captured while working undercover in Springfield and was strapped into the scanner, giving the Doctor's creation a limited knowledge of the Joes' plans.

As the battle raged outside, the new being named Serpentor (a name chosen by Mindbender because it had "a snake-like ring to it") came to life. Some later came to believe that at that moment, something metaphysical happened, and Serpentor truly was the amalgamation of all those famed soldiers. He was at first confused and unsure of his own identity.

"Serpentor? Is that my name? I seem to remember others, but 'Serpentor' will do for now."

Dressing himself in a snake-shaped cowl from a nearby museum display case, Serpentor proceeded to correctly predict the Joes' next action, impressing the assembled Cobras. Reluctantly, they allowed Serpentor to lead their troops against the Joes in a holding action to give Destro and the Baroness time to evacuate the town. In the fighting that followed, Serpentor led the attack personally, displaying not only his tactical skills but his charismatic leadership. The Joes were surprised by the sudden appearance of this great leader, and were nearly overwhelmed. All the while, Serpentor rallied the troops in a way that the other Cobra leaders never had.

Eventually, Springfield was evacuated and all of Cobra's forces escaped, leaving the Joes with an embarrassing failure and no evidence of Cobra's subjugation of the town. As the citizens of Springfield journeyed to Cobra Island via a squadron of helicopters, Cobra Commander was furious. He scolded himself for not having realizing that history's greatest warriors were also great leaders and conquerors. The troops reportdely loved Serpentor and would follow him to the ends of the earth. As the 'copters approached the landing field on Cobra Island, the Commander ordered Tomax and Xamot to set up Crimson Guard snipers, with orders to assassinate Serpentor before he could usurp his authority.

Serpentor realized what was about to happen and had the pilot land his helicopter inches away from where Cobra Commander waited. He lept out of the 'copter and embraced Cobra Commander as if he were a long-lost brother. The snipers were unable to fire on him, and in the speech that followed, Serpentor proved to be a moving speaker. The crowd of Cobra troops and their families were so taken by him, that the Commander knew he could never go through with the assassination.

After his arrival, Serpentor did everything he could to endear himself to the troops. He even labored with them as they built new structures on the island, much to the Commander's disgust. He gained allies in the Baroness -- who had become increasingly enamoured with him -- and Dr. Mindbender -- who was mostly pleased with himself for his success in creating Serpentor. Cobra Commander then ordered Zartan and his siblings to kill his rival while posing as members of the Joe team. The plot failed when the Baroness threw herself in front of Serpentor, refusing to let him be killed.

Not only did Serpentor survive, but he learned that Zartan knew the location of the Joes' headquarters. He planned an assault on the Pit, forcing the Commander to go along with him, threatening to reveal the assassination attempt to his troops. The invasion of the Pit was soon underway. The Joes were suspended at the time, so it was relatively easy for Cobra to get to the Pit. Serpentor would have led troops into the underground headquarters, but he was stopped by the Commander who wouldn't allow Serpentor to command his men. Impressed with the Commander, Destro joined him. In the battle that ensued, Hawk and the officers destroyed the Pit to stop the invasion. Destro and the Commander were presumed dead, and the rest of the Cobras escaped back to Cobra Island. Unknown to anyone at the time, Destro and the Commander were still alive underneath the rubble of the Pit.

With Cobra's leader out of the way, Serpentor wasted no time in taking control of the organization. He brought Cobra into the weapons market, selling Terror Drome launch bases to any nation that could afford him. Included in the deal were military advisors from Cobra, helping them get a foothold in various nations. The first buyer was the war torn country of Sierra Gordo, where a new provisional government had been formed after a recent revolution.

Another faction in the nation was not happy with the new government and staged their own "counter-revolution", gaining the support of the United States and the Joes. As the fighting escalated, Serpentor himself arrived to help, but the Joes had already captured the Terror Drome and dismantled it. Hoping to secure the only complete set of plans for the launch bases, Serpentor sent Major Bludd to pose as Destro and retrieve the plans from his castle in Scotland. Again, Serpentor's scheme failed thanks to the Joes and the true Destro's unexpected return.

Despite some setbacks, Serpentor went ahead with his new vision of Cobra. For a time, he remained in charge, proclaimed the Cobra Emperor by his troops. Months after he first took over Cobra, he was shocked when a mysterious stranger arrived on Cobra Island, claiming he was the true Cobra Commander, returning to take command. Serpentor was suspicious, and with good reason. The imposter was really Fred VII, a Crimson Guardsmen who had recently shot the true Commander and left him for dead. After questioning Fred for hours, Serpentor finally saw a way to prove his identity. The Baroness arrived, and it was known that she knew what the Commander looked like unmasked. Fred and the Baroness climbed into a transport helicopter away from prying eyes and the imposter revealed his identity to the Baroness. But instead of exposing him, she told him he had just gained a silent partner, and then proclaimed to the troops that their Commander had returned. Serpentor suspected that he was being lied to, but there was nothing he could do about. Not long afterward, he learned the truth, but for the sake of the troops, he allowed the deception to continue. After a brief power struggle, the two men's anger got the better of them at a special ceremony on Cobra Island and a public argument soon turned into a fist fight. Eventually, all of Cobra took sides, and island was soon thrust into a civil war. As the fighting began, Serpentor was supported by Dr. Mindbender, Tomax, Xamot and the Crimson Guard. Fred VII's side included the Baroness, Zartan, the Dreadnoks and the army of Vipers. Despite his superior tactical knowledge, Serpentor's side was outnumbered and he was about to lose the war until Dr. Mindbender had an idea. Just before the fighting started, Cobra had stolen a top secret "black box" from the Joe team that contained some of the military's most advanced electronics. The Pentagon was desperate to get the device back, and Mindbender guessed they'd do almost anything. As Serpentor's representative, Mindbender proposed a deal: they would return the black box in exchange for the Joes' help in defeating Cobra Commander. The Pentagon reluctantly agreed, deciding that Serpentor's rule as "Emperor" was a monarchy, while Cobra Commander's was a dictatorship.

The Joes arrived on Cobra Island and the battle raged on for days. Hawk and Serpentor were constantly at odds, both believing they should be in command of the operation. Hawk also felt that Serpentor was acting too recklessly, putting himself in too much danger while leading his armored divisions atop a HISS tank. But, he could barely resist, reveling in the battle as the men he was created from always had. The combined forces of Serpentor and the Joes were overrunning Fred VII's defenses, and he began to panic. Upset by Fred's indecisiveness and inept leadership, Zartan had had enough. He climbed atop a tank, pulled back his bow and fired an arrow toward Serpentor's HISS tank. The arrow struck the Cobra Emperor right between the eyes, killing him. Dr. Mindbender had been sitting next to Serpentor and stopped the tanks, jumped out of his own and ran towards Fred's forces. He quickly made a deal, saving himself now that Serpentor was gone. Both Hawk and Zartan were disgusted, but the war was over and Serpentor was no more. Mindbender preserved his body in the island's land-locked freighter, hoping to find a way to revive his creation, but the body was believed lost when the true Cobra Commander returned and buried it under tons of rock.

The process to create Serpentor was used to create Hannibal and later Serpentra. 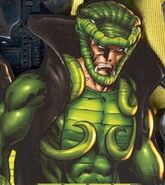 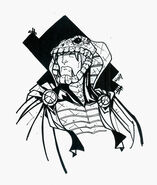 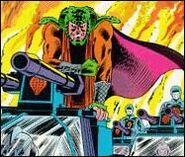