The name or term Seawing refers to more than one character or idea. For a list of other meanings, see Seawing (disambiguation). 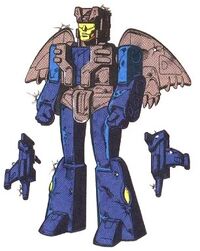 Seawing is the eeriest, most ominous Seacon - and he knows it. He glides through the ocean depths like a sinister steel specter, spreading fear among all who see him. This pleases him greatly. "Who better to rule than he to whom all bow," he reasons immodestly. Some Seacons speculate that Seawing's ambitions go beyond the Seacons and reach planetary control itself. Not denying this, Seawing does much more to achieve his goals than merely frighten some tin-scaled robo-fish. He is an expert at his job, and he enjoys every moment of it. Once he zeroes in on a target, he uses his wits to surprise and then his armaments to destroy. And underwater, nothing escapes his notice... or his grasp.

In manta ray mode, Seawing employs a battery of sensors - electrical, chemical, infrared - and long-range sonar in his reconnaissance missions. His sensitivity is such that he can locate a screwhead on the ocean bottom up to 20,000 feet below him. He can detect and home in on anything living or moving in the water within a 20-mile radius. His maximum speed is 110 mph. In manta and robot modes, he is equipped with two venom lasers which shoot beams that paralyze on contact. In weapons station mode, he combines with the lasers to become a powerful dual proton blaster. He combines with his fellow Seacons to form the super-robot, Piranacon.

In manta ray mode, Seawing's optical modules are adjusted to pick up the very dim light that reaches the ocean depths. As a result, he is very sensitive to bright light, and is easily blinded by sudden flashes underwater.

Later In 2016 the Seacons attacked the Hydrax Spaceport and hijacked the Millennium Falcon and rechristened it The Hatemaker. They soon used the ship to attack the Central Spaceport in Ibex. Forced to retreat, they holed up in the sewers beneath Ibex, severely thrashing the first Autobot team that went after them. Soon after they used the underground tunnels to attack Iacon, setting off bombs in Trion Square and injuring dozens of civilians.

Seawing was badly injured when the Seacons allied themselves with Dal Matia. He was shot by Cyclonus and buried in the collapse of Silent Grill. He was later dug out by Snaptrap and repaired.

Later, Seawing attacked Altihex to draw out the Autobots. When Dust Devil arrived to stop him, Snaptrap halted the attack. He approached Dust Devil to ask him to gain access to the Chamber of Vector Sigma. Dust Devil was cagey, and offered instead to pass along a message and let Vector Sigma decide if Snaptrap could approach it. Snaptrap agreed for now, and let the young Autobot go to seek Vector Sigma out alone.

When Dust Devil returned without contacting Snaptrap, Snaptrap sent the Seaclones to instead invade Autobot City to recover the Key to the Plasma Energy Chamber. Overbite launched an attack on the city while Seawing infiltrated to steal the key. However, even though Seawing was able to overcome the Key's protector, Red Alert, Jetfire was able to grab and key and flee before Seawing could recover it. For Seawing's failure, his punishment was repairs at the hands of Tentakil and Nautilator.

According to Snaptrap, Seawing's voice to him sounds like Vincent Price.

The Seacons are TP characters available for temping. In 2016 BZero took over Seawing.

In the Shattered Glass universe, Seawing is a heroic Decepticon-allied Quintesson.

Retrieved from "https://tfumux.fandom.com/wiki/Seawing?oldid=66286"
Community content is available under CC-BY-SA unless otherwise noted.