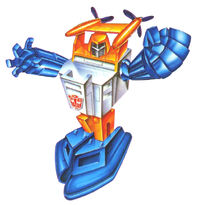 Earth's ocean: an immense and drastically variable desert made of water, which hides a menagerie of the largest, the smallest, and the strangest creatures on the planet. Sunk in its dark and trackless depths lie ancient and forgotten relics, mingled with the spoils and remains of Man. This ocean, this vast mystery, is Seaspray's element, and he loves it dearly.

As a hovercraft, Seaspray is capable of speeds up to 120 knots and has a 4000-mile range. He's equipped with various sonar and radar devices as well as underwater and surface-to-air laser cannons. He also has wheels that enable him to travel for short distances on land. In robot mode, he also has use of his laser cannons, which he can shoot through his hands.

The oceans of Earth are not alone in his affections. On any planet, at any time, Seaspray is a consummate sailor. Because he is not very comfortable on land, Seaspray does not do well in ground fighting. On the water, however, he has few equals.

Seaspray arrived on Earth during the initial impact of the Ark into the planet. He had been present when the Ark crashed onto prehistoric Earth during the encounter wih the Nemesis, but due to being in the more heavily-damaged Ark belowdecks, he was not recovered and repaired for almost a year.

Seaspray was first seen on Earth fighting Johnny Depp with Tracks and Cliffjumper when a time warp unleashed a ship full of pirates on the 20th century. After locating the vessel with his radar, Seaspray helped the other Autobots push the galleon back through the timewarp before it sealed up.

Seaspray was next seen helping Perceptor and Beachcomber on a geological survey near the coast. When Blitzwing and the Seekers staged a surprise attack, Seaspray engaged Ramjet in battle over open waters. Remarkably, the dim-witted Decepticon tried to ram the Autobot hovercraft and ended up splashing into the briny drink for his troubles. Seaspray got thrown for a loop when Ramjet eventually came back up for air, but still managed to shoot down the Conehead in the end. Thrust's discovery of a nearby electrum pool took away any chance of a fair fight, however, and so Seaspray and Perceptor were captured and taken back to the Decepticon undersea base.

After the entire Decepticon army coated themselves with electrum, Starscream forced the two Autobots to fight to the death for the amusement of his troops. They attempted to escape by blowing a hole in the outer hull, but were caught on the way out by Megatron, who was returning with a third prisoner, Beachcomber. The Autobot geologist later managed to disable their guards, and they shot their way to freedom through a porthole. Using Seaspray's back-mounted propellers, they sped their way to safety and joined up with the rest of the Autobots at the electrum pool.

Working with the New York City police on their Crimebuster program, Seaspray had the unenviable task of patrolling the Hudson River and other waterways. He found nothing useful but sludge and grime.

Out waterskiing with Bumblebee one afternoon, the two Autobots stopped as dusk and Seaspray engaged in an old Earth superstition, wishing on the first star of the evening. He doesn't tell Bumblebee what his wish was for, but moments later, they received a garbled distress signal from a distant planet. After conferring with Optimus Prime, they took Perceptor and Cosmos to investigate the signal, only to discover it had been sent by a Decepticon creation known as Deceptitran, requesting aid because his slaves were revolting. The Autobots quickly got involved with the local revolution, and "bubble-head" just as quickly fell head over heels for Alana, one of the human leaders of the rebellion. Thanks to the miraculous Well of Transformation used by her people, the Tlalakans, both Seaspray and Alana were able to experience life in the other's shoes, with him temporarily becoming (mostly) human and her changing into a robot. Deceptitran and his allies were defeated, and Seaspray proved that even a chunky robot with a throat full of mouthwash can find true love.

During the Great Flood of 2011, Seaspray was captured and tortured by Scourge. Seaspray was eventually rigged to the underground polar installation with explosives in an attempt to keep the Autobots from attacking it. Ultimately He was rescued by Brawn and Jazz and the Autobots and Joes detonated the Decepticon under-sea installation, but Seaspray took some time to recover from his ordeal in the Arctic, and still harbors (no pun intended) slight fear of the Sweeps and an uneasiness in polar regions, which is mostly keeps to himself.

In 2013 he was active in protecting coastal areas from Seacon attack.

In 2016 he travelled to Cybertron to help hunt Seacons in the sewers of Ibex. He engaged Nautilator, but was forced to break off to rescue his teammates Aegis and Subsea, who had been overwhelmed by their opponents.

In 2017, Counterpunch, Dust Devil, Seaspray, and Shockwave travelled down to the Cybertron Underworld to seek out the knowledge of Vector Sigma. In spite of clever diversionary efforts by Counterpunch, the Decepticons were almost overwhelmed by Centurion Droids... until they were suddenly called off by Dust Devil.

Seaspray is available for application. Until then he is played by Bzero.