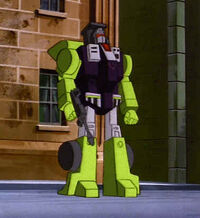 Scrapper is the engineer of the Constructicons. While the other Constructicons put their masterpieces together, Scrapper is the one who designs everything for them. His designs are among the best in Transformer history; however, Scrapper is a modest Decepticon who quickly shrugs off the praise he receives. In that respect he is the polar-opposite of his frequent second-in-command, Hook, who is an egomaniacal glory-hound.

Though modest, Scrapper is still a total nutcase. One of his favorite artistic liberties with his designs involves taking living Autobots and using them as raw materials. This vicious act is something Megatron finds admirable, as he considers Scrapper the most valuable of the Constructicons.

In vehicular mode, Scrapper's shovel can slice through 12-inch thick carbon-steel plate and lift up to 30 tons. By adding on his single-jet levitation wing he can fly at 60 mph for 250 miles. In robot mode he has immense strength and carries a laser pistol. When combined with his fellow Constructicons, he serves as the right leg module and part of the torso module in the giant robot known as Devastator.

While flying, Scrapper is a very vulnerable target due to his lack of speed and maneuverability. His shovel is prone to metal stress fractures if overused.

On Cybertron, Megatron used the Robo-Smasher to make Scrapper, who was good, evil. Even when the Robo-Smasher effects wore off, Scrapper decided he liked being evil and never looked back. Later Megatron re-built Scrapper on Earth.

Scrapper and the Constructicons were active among the Decepticon forces on Earth in 1984. They attempted to infiltrate Autobot headquarters to destroy the Autobot computer Teletraan I, but failed and ended up having a lava bath.

The Constructicons were later vital in transforming New York City into the Decepticon city of "New Cybertron," and in the process Scrapper got to recycle Optimus Prime into a robotic alligator.

The Constructicons later built a drill leading into Earth's core, in order for Megatron to tap its energy. While working on it, Scrapper had a dominator disc snuck onto him by Sunstreaker, allowing the Autobots to control the Constructicons when merged into Devastator. The combiner fought his fellow Decepticons for a while before the discs were overloaded and they returned to normal. Scrapper then provided a peptalk for his team before they saved the Earth from their own drill, which had gone out of control.

At one point, Scrapper convinced Hoist and Grapple that the Constructicons wanted to aid the two Autobots in a construction project to build a solar tower. Scrapper claimed to have admired Grapple's work back on Cybertron. When Megatron found out, the Constructicons had to explain (at gunpoint) that they were still loyal to him, and once the tower was completed they would turn it over to him. The plan initially succeeded, but the tower was soon destroyed in a battle between the Autobots and Devastator.

Later, when the other Decepticons began to suffer from Cybertonium degeneration, Scrapper and the Constructicon worked fine. They took delivery of a shipment of the mineral via the space bridge, and failed to stop Spike Witwicky and Carly from getting by them and traveling to Cybertron.

When faced with the mighty Omega Supreme, long out for revenge against the Constructicons, Scrapper repeatedly taunted and insulted him. In return, Omega Supreme beat the slag out of Devastator, but couldn't finish the job due to a surprise visit from an asteroid bird alien.

When the Constructicons were tasked with building a drone army out of human cars, Scrapper was seen slicing the machines apart with a sword.

Scrapper's nasty side was later shown when he worked under Blitzwing, who had temporarily overthrown Megatron. Scrapper used the remains of damaged Autobots to make a throne for himself... nasty!

Scrapper is leader of the Constructicons, and was commander of the Decepticon Medtech division until it was taken over by Harbinger, who is now known as Nemesis. In 2012, he traveled to Cybertron to help free Mixmaster from the control of the Dweller. When Starscream was successful in assisting Mixmaster, Scrapper pledged Devastator's support in defending Polyhex.

Polyhex, however, was destroyed by Hubcap, and Scrapper was pressed into building new quarters in Tyrest, rebuilding the Jekka Amphitheatre for the purpose. With that primarily completed, Scrapper is working on built a new Space Bridge terminus to Earth, after which he prepared Trypticon for a trip to Cybertron.

In 2017, he joined the rest of the Constructicons in Toraxxis to help build a new mega-refinery.

In 2020, Scrapper was given the secret task of building a new Nemesis-class vessel.

Scrapper has in the past been temped by BZero, but is currently available for application.