The name or term "Scrap Iron" refers to more than one character or idea. For a list of other meanings, see Scrap Iron (disambiguation).

It is believed that SCRAP-IRON is a product designer for Destro's armaments company (MARS). Scrap-Iron carries out initial field testing on all new armor piercing munitions and sub-munitions. His area of specialization is remote-launched, laser-guided, rocket-propelled piezoelectric fused anti-tank weapons. These weapons are categorized beyond the "smart" stage and are known by the nomenclature "brilliant." Scrap-Iron is methodical and precise. Imperfection in any form repels him. Perhaps that's why he wants to blow up the world.

The man known as Scrap-Iron is a world-class armaments designer, skilled at creating new types of anti-armor weapons. Methodical and precise, Scrap-Iron's hatred of imperfection drives him to create new weapons that have moved beyond the category of "smart" weapons to "brilliant" weapons. It's widely believed that Scrap-Iron was a product designer for Destro's MARS company before joining Cobra. He was responsible for field testing new anti-tank weapons for Cobra, including his remote-fired missile launcher and a portable, hand-held variant.

On one of his first operations for Cobra, Scrap-Iron joined Firefly and Buzzer in pursuing the Soft Master, who was fleeing the Springfield police station. As he fled in a stolen police car, he just barely drove past a oncoming train and caused a drunk man, driving a car carrying two hitch-hikers -- Billy and Candy, to crash. As the Soft Master turned back to save those in the accident, Scrap-Iron fired a missile that killed the old ninja. Then, on Firefly's order, he fired another missile at the car wreck, killing the driver and Candy, and causing Billy to lose an eye and a leg.

After taking part in the Battle of Springfield fighting against a G.I. Joe invasion, Scrap-Iron mostly settled into the background of Cobra operations, spending more time in the lab than in the field. He served as weapons officer onboard the Cobra space shuttle as it fought the Joe team's Defiant to destroy a group of communications satellites and later took part in the Cobra Island civil war.

Some time later, Cobra made a deal with the government-contracted electronics company Nexus-Tech to destroy the company's documents, which would have proven they were cheating the government. A phony hostage situation was staged by Cobra BATs disguised as terrorists and Cobra operatives -- including Scrap-Iron -- posing as scientists being held hostage. After destroying the documents, Scrap-Iron and the others swallowed capsules with microfilm of the documents inside them. When they were "saved" by the Joe team, the Joes' mission leader, Stalker figured out the truth. He sent them to the hospital to be checked out, knowing full well that any x-rays taken at the hospital would ruin the microfilm. It's unknown if Scrap-Iron escaped arrest, since his subsequent activities with Cobra are unknown.

While the Joe team was shut down and Cobra was out of commission for several years, Scrap-Iron resurfaced, working on a number of projects for Destro.

When Cobra Commander returned to the United States in 1997 with a renewed Cobra organization and sent for his former high command, Scrap-Iron answered the call. Scrap-Iron continues in the employ of Destro and MARS. In 2015, Scrap-Iron took part in the attack on the Pit.

Scrap-Iron is available for application. For the Pit Invasion he was played by Greengoblinsrk. 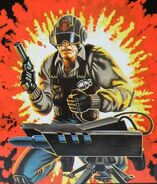