This page is for the evil hunter/destroyer Scourge. For his heroic Shattered Glass counterpart, see Scourge (SG). 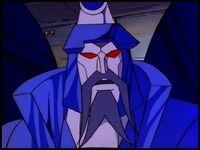 Scourge is a fearsome and implacable hunter-destroyer. Unicron created him from the wreckage of dead Decepticons to hunt down and eradicate Autobots and their human allies. He is disturbingly effective as a tracker-terminator, possessing powerful high-tech scanning and locating equipment with which to hunt his prey. Scourge is merciless, and uses an arsenal of weapons, including laser blasters, target-dissolving acid rays, disintegrator beams, and assorted demolition and fusion devices. He can transform to a scouring space-worthy hovercraft capable of handling any terrain when scanning for "survivors." Scourge's only weakness is his overwhelming arrogance.

Scourge was created from the wreckage of an unfortunate Decepticon long-range patrol that ran afoul of Unicron. While originally subservient to the Chaos God, since Unicron's destruction Scourge is a free agent, and has thrown his lot in with the Decepticons, gleefully hunting down insurgents on the planet Cybertron.

In 1999, Scourge was sent to Earth by Cyclonus to capture and retrieve Alpha Trion.

In 2011, he ran several attack runs against the USS Flagg during the Great Flood.

In 2012, Scourge was present during an attack on a Canadian oil pipeline. Scourge attacked Autobot embassador Crosscut while Elita One rescued oil workers. Scourge later tracked Crosscut to Mexico, where Crosscut was briefly captured before Scourge was driven off by Blaster piloting the Autobot Shuttle Outrider.

When an otherworldly Sweep showed up outside Trypticon in 2012, Illarion went out to meet him, ascertaining it was a Shattered Glass Decepticon called Sunder, and suggested to Scourge that this Sunder might be an excellent source of intelligence on the world on the other side of the rift.

The Trans-Organics swarmed Cybertron, although many of them were hunted and killed by Scourge and his Sweeps, including Demogorgon.

When Hubcap was taken into Darkmount, the Dweller followed, laying seige to Polyhex. Many flying Trans-Organics breached Polyhex's walls, where they were defeated by Starscream and his Air Warriors. However, Hubcap was able to escape and take control of the city's defenses, turning them against the Decepticons while allowing the Dweller and its minions to swarm into the city. The capitol was abandoned, although Scourge and the Sweeps remained as an underground resistance force. When the Dweller abandoned the city, Cyclonus and Scourge hunted down the remaining energy vampires, capturing or exterminating any left in the city.

In 2013 Starscream defeated Cyclonus in personal combat and had him arrested for treason, thus cementing Starscream's role as sole leader of the Decepticons in Megatron's absence. Scourge was tasked with carrying the null-rayed body of Cyclonus to Tyrest, where Cyclonus was incarcerated pending trial.

On the fourth of July, After being rigged with a tracker and repaired just enough to remain functional by Spike Witwicky, Jetfire, and Throttle, Nightlash was found by Decepticon forces in a comatose state. Assisted by Rainmaker, the sweeps Scourge and Plunder managed to get her stabilized and back safely to Trypticon. During the flight back, a tracking device belonging to the Autobots was found on Nightlash and destroyed.

In November of 2013 Nightlash made a public appearance to antagonize Jazz in a rural farmland area. Combat ensued as Nightlash opened up, taunting her adversary about delivering his head on a platter to Cobra Command for inspection and dissection. In spite of a weak start, Jazz gained the upper hand in the end and overpowered her, leaving her unconscious to be recovered by Scourge.

In 2014, Bloodwulf was infected by Arkeville's primitive virus, and had to be dragged back to base by Scourge and Singe.

In 2018, Scourge participated in an attack on the Ark. Soon after, Megatron made Scourge CO of Decepticon Intelligence. Later, Cyclonus was reestablished as Intelligence CO.

"It appears the entity known as Nemro attempted to destroy me while I recharged. It claimed it had created us, but that we had betrayed it, so now it was coming to destroy us. And yet, perhaps there is a means to defeat it. If it weren't for Starscream waking me up in time, I might have succumbed." The Sweep Leader's brow furrows.

The Decepticons launch an energy raid in Jamaica!

May 01 - "Diplomatic Mission to Praxus"

Crosscut and Spike enter into negotiations with Sky High of Praxus.

Rubbish and Typhoon try to defend Kashagan Field from a Decepticon incursion.

Scourge reporting. Misfire and I engaged an Autobot and a Junkion at an oil field near the Caspian Sea, and managed to drive them off so we could secure the fuel for Decepticon use. We have transported some energon cubes to Trypticon and will continue to do so, that we may have a surplus in case of eventual Autobot intervention. For the greater glory of the Decepticon Empire!

A group of neutrals tries to escape the doomed planet Cybertron.

Retrieved from "https://tfumux.fandom.com/wiki/Scourge?oldid=74729"
Community content is available under CC-BY-SA unless otherwise noted.