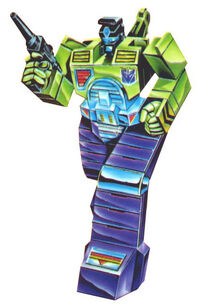 "C'mon guys, wait up..." You can't help but feel sorry for Scavenger. He wants so badly to be liked and needed, to feel like a useful and valuable member of his team. His self esteem is so low he'd do just about anything to get the approval of the others, but his simpering, doting eagerness to please just reinforces the other Decepticons' opinion of him as a worthless loser. He's constantly excavating everywhere he goes in the attempt to find something of worth to please everyone and prove his value, but it's invariably just some piece of garbage or scrap he excitedly finds, and that just reinforces their opinion of his worthlessness once again. If it wasn't for his shovel's unique ability to detect needed materials, Megatron and the others would likely have dumped the poor scrub long ago.

In vehicular mode Scavenger's power shovel is equipped with a variety of magnetic, ionic, electrical and gas sensors that allow him to detect the presence of a variety of materials within a 500-yard radius. He can also emit sonic charges into the ground. By analyzing the echoes that come back to him and using his other sensors he can determine with 80% accuracy the composition of the ground underneath him to a depth of 1.2 miles. His power shovel and detection powers combine to give Scavenger the ability to locate and uncover any number of materials, from trace metals to fuel sources, that might be useful to the Decepticon cause. He carries a missile launcher in vehicular mode and a laser pistol in robot mode. Scavenger combines with his fellow Constructicons to form Devastator, where he serves the useful function of right arm.

Scavenger's abilities are diluted by his poor judgment, which causes him to squander vast amounts of his fuel supply. He is also prone to overtaxing his power shovel, causing it to break down from metal fatigue.

For their first mission on Earth, the Constructicons raided an experiment power plant for the energy disc components and power converter on-site. The humans were using the components to tap into Earth's magnetic field for an infinite power supply and all the energy they'd ever need. Such a simple-minded (and straight-forward) scheme was too unimaginative for the mighty Megatron, however — he had the Constructicons (1) build a strength transfer machine so that he could (2) utilize the powers of his fellow Decepticons to (3) best Optimus Prime in personal combat and (4) force the Autobots into exile in deep space as a matter of honor, which would (5) leave Earth's resources open for plunder by the Decepticons in order to get (6) all the energy they'd ever need. An evil scheme without at least five unnecessary steps is fodder to Megatron.

To ensure his treachery went undetected, Megatron sent the Constructicons to destroy Teletraan I, and prevent the super-computer from alerting the Autobots to his strength transfer. While all the Autobots left the Ark to watch the combat, Scavenger and friends tunneled into the volcanic caverns underneath Mount St. Hilary. Using his shovel's sensors, Scavenger pinpointed Teletraan I's location so that Mixmaster could burn his way through the floor of Autobot headquarters. They thought the mission would be as simple as destroying a computer console...but nothing is simple when the Dinobots are on guard duty. The dim-witted but battle-hardened Dinobots forced the Constructicons outside and away from Teletraan I. To compensate, the Constructicons assumed their Devastator mode and turned the tide. With Teletraan I still active, though, the Autobots quickly uncovered Megatron's deception, and came to lend their dino-buddies a hand. Hound used his holograms to distract Devastator long enough for Optimus Prime to blast him to pieces. Fleeing from the Dinobots' wrath, Scavenger and his teammates tumbled into a lava fissure opened up earlier by Sludge's groundquakes, and were temporarily deactivated.

During a plan to turn New York City into New Cybertron, Megatron employed the Constructicons for...urban renewal. Several landmark buildings in Manhattan were loosened at their foundations and lowered into underground caverns by the Decepticons, allowing Cybertronian towers to be raised in their place. While Scrapper and Hook argued over whose creative contribution was greater to the overall plan, Scavenger dutifully used his shovel to break the foundation of the Empire State Building, and quickly jumped to safety as the building fell onto the lowering platform. When the Autobots arrived to stop the Decepticon plan, Megatron arranged to kidnap Optimus Prime with Scavenger's help. After Laserbeak reported the Autobots would be at a rendez-vous in Central Park, Megatron and Scavenger travelled to that location in their underground lair and, reviving the trick he used on Teletraan I earlier, Scavenger pinpointed when they were directly underneath Optimus Prime in the park above. Scavenger then slammed his shovel with enough force to shatter the ground under Prime's feet, causing the Autobot leader to fall into Megatron's awaiting arms. Later on, Scavenger and the Constructicons joined forces to form Devastator, but were once again taken down by a single shot from Optimus Prime's laser rifle. And his arm wasn't even attached this time!

When next employed by the Decepticons, Scavenger and the Constructicons built a transfixatron for Megatron to freeze the Autobots in vehicle mode. After rendering the Autobots helpless, a second (and elaborate) Constructicon device would crush the Autobots into chunks. In a turn of events no one could possibly see coming, the initial plan failed and Megatron was forced to rely on his back-up strategy: initiate Devastator and crush everything. This time, Wheeljack and Cliffjumper defeated Devastator by turning the transfixatron on its own creators, causing Scavenger and friends to lose their "transformation identity" and revert helplessly back to vehicle mode.

In their next endeavor, the Constructicons were charged with building a drill to tunnel down to Earth's molten core, unleashing the energy for Megatron's use and consumption. Scavenger nearly upset the entire project, however, after a malfunction in his geological sensors guided the drill to an unstable part of the mantle—the resultant rock fracture nearly upset the entire drill site. What's worse, when Scavenger was having his circuits checked out by Mixmaster on the surface, they were spotted by a group of Autobots. This in part led to the Autobots temporarily gaining control over the Constructicons and Devastator, although Megatron would tell you that was part of his plan all along. In the end, Megatron's plan inevitably went wrong and threatened all life on Earth. Devastator was the only one who could fly to the center of the earth to stop the drilling in time. In their group huddle before combining, Scavenger actually started tearing up, telling his fellow Constructicons how great it was being part of the team. Bonecrusher essentially told him to stop being a robo-pussy, and then they saved the world.

Sometime later, Scavenger and the Constructicons exploited Grapple's artistic nature for their own ends. Grapple had designed a solar power tower that could produce limitless energy, but couldn't get the plan approved by Optimus Prime without an explanation of how he'd keep it from the Decepticons. The Constructicons came upon Hoist and the distraught Grapple, and offered their services for the "greater glory of art." Scavenger was right there with the other Constructicons, manipulating Grapple's pride as an engineer. The Autobots eventually destroyed the tower and saved Grapple and Hoist after the Constructicons turned on them, but this outing proved that—despite his easy-to-please nature and team player attitude with his fellow Constructicons—Scavenger was ultimately a Decepticon at heart.

When searching for the Nemesis after it was unearthed in Central America, Scavenger and the Constructicons aided the Decepticons in clearing a path to the lost ship. Scavenger enjoyed some bonding time with Rumble, destroying the folliage and making fun of Starscream. Later, he used his sensors to track down the ship's stardrive by locating the Cybertroid alloy inside.

Nearly all the Autobots and Decepticons on Earth began suffering from a Cybertonium deficiency, losing their fine motor control and proper operating status without this necessary element. Scavenger and the Constructicons were among the few Transformers on Earth unaffected (which actually makes sense under any of their origins), and were awaiting a shipment of Cybertonium from Shockwave via the Space Bridge when the Dinobots attacked. Scavenger missed the call-to-arms to become Devastator, though, and was knocked aside by Sludge before he could merge with the others. This left Devastator a handicapped southpaw, and the Dinobots made their way through the Space Bridge to Cybertron.

While mining an asteroid in low orbit for Megatron, Scavenger and the Constructicons confronted Omega Supreme for the first time since leaving Cybertron. They only managed to avoid his vengeance because Optimus Prime forced Omega Supreme to put his duty before revenge—it was clear that a mad Omega Supreme would easily outmatch Devastator in a fight any other day of the week.

Scavenger's sensing abilities enabled the Decepticons to precisely locate and excavate the Pearl of Bahoudin. His digging uncovered the Pearl and its weather-altering powers for Megatron. Shortly afterward, he joined almost a dozen of his teammates in surrounding and firing on three Autobots who had captured the Pearl.

After Starscream finally engaged in open rebellion against Megatron, the Decepticon commander gathered Scavenger and the other Constructicons to his side in order to battle the traitor and his brigade. Megatron considered Devastator his ultimate weapon to use against Starscream, but Screamer had prepared his Combaticons with a combined form of their own: Bruticus. Bruticus made remarkably short work of the Mighty Devastator.

While digging, Scavenger once found a KFC bucket which he was sure was the key to understanding the humans beliefs and weaknesses. He was eventually shot down. In 2012, he was called to Cybertron to help combat the Dweller.

Played masterfully in the past by CalihexInmate, Scavenger is now available for application. In the meantime he's played by Bzero.