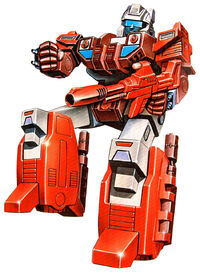 Scattershot needs no desktop generals or academy-trained slag skimmers to tell him how to fight. He just wades into a Decepticon patrol and doesn't come out until he's broken all his toys, with guns and acid pellets on full-auto from start to finish. That's what he calls "strategy." Though Scattershot forms the main body of the giant Computron, if his own mind holds any fragment of the thoughtful titan's slow, considered approach, he hides it very well.

Grimlock certainly likes his style, and even the tin-plated bucketheads that think he's a blustering buffoon must admit that Scattershot is uniquely tough, the sort that Brawn would say "broke the mold he was poured in." He won't stop fighting until he's utterly spent, down to his last microjoule of energy and drop of energon. He expects no less from the Technobots under his command.

In vehicle and battle station modes, Scattershot has an electron pulse cannon in his nosecone; as well as an array of sonic, thermal and artillery shell guns. In robot mode, he has a 500 rounds-per-minute automatic acid-pellet gun.

Scattershot lead a small force on Cybertron during the long, dark period after Prime and Megatron disappeared.

Scattershot and the Technobots continue to patrol Cybertron unless called to Earth by Optimus Prime. In 2012 they went on a secret mission for Alpha Trion. After the Dweller was destroyed, the Technobots spent months down in the tunnels below Kalis, mopping up most of the remaining Trans-Organics. In 2014, Scattershot returned to Earth.

Scattershot was played by Whitedagger until Apr of 2015.

The third season cartoon isn't canon, so Scattershot and the other Technobots are simply another fighting force on Cybertron.

"Scattershot here. On my way to Earth, hearing of a bit help needed through the network, I ordered Afterburner, Strafe and Lightspeed through the Spacebridge. bad intel on my part, I know, but Afterburner came up with the idea for Lightspeed to hack the Spacebridge terminal and get inside of Metroplex while we distracted the decepticons. Apparently a second plan was in place for Steeljaw to sneak into Autobot City with the cure.

"Jetfire took commands of the assault in Prime's absence, while I spearheaded the assault with Nosecone. Once we had their attention, Steeljaw snuck into the city, and met up with Afterburner and the rest of the Technobots, as well as, as I hear, Sandstorm, who had so entrenched himself in Metroplex that few, even of us, knew he was there. He managed to blind many of the sensors on the way to the command center. the room before the command center, Sandstorm engaged Scrapper in a wrestling match to keep him from alerting the cons in time before Lightspeed could administer the cure and get Ghost out of the system.

"Meanwhile, outside, Ghost seemed to make full use of Metroplex's systems. Flame, Typhoon, Jetfire and Superion took the fight to Shockwave, Thundercracker and that supreme buckethead, Starscream. In the end in the outside battle when Metroplex came online, Only Superion was still standing, but we managed to get Metroplex back on our side and sentient.

"We'll be taking a long time in repairing Metroplex, and I'm sure the buckethead's hacker has left a few kinks in the system, so if Perceptor and Lightspeed can help get metroplex clean from bugs, that'd be great. I'm sure First Aid and the rest of the tech teams are already getting to work on Metroplex's systems as well.

"Also, after the battle, I snuck a glance up to a bluff and saw a peculiar sight.....a flying van, did anyone else see that?

"One last thing. While I'm glad to be back in Autobot City, under repairs admittedly, we have something more important back. Metroplex.

Scattorshot (SG) is a shy yet blustering Autobot warrior.