This page is for the Autobot triplechanger. For his evil Shattered Glass doppelganger, see Sandstorm (SG). For the Joe MP, see Specialist Sandstorm. 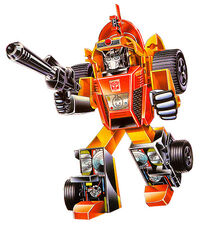 Sandstorm takes death-defying risks whenever he can. He likes to get close enough to the enemy during his patrols so he can count the number of bolts in a Decepticon's armor plate. Only by being so daring, by getting his fuel pumping so strongly that he feels his internal circulatory hoses about to burst, does Sandstorm truly feel functional. He likes to live on the edge. Anything less than dangerous he finds boring, and when he's bored he's more likely to be in danger since his concentration lapses. Sandstorm fears only one thing: an end to the war. With no enemy to spy upon, he worries he will have no further useful purpose.

In both helicopter and buggy modes, Sandstorm is adept at directing his rotor blades and exhaust at the ground to whip up blinding clouds of dust and sand. As a Sikorsky S-62 amphibious transport helicopter, he can go 200 mph and has a range of 800 miles. In buggy mode, his 4-wheel drive allows him to traverse the roughest terrains. He can reach a speed of 100 mph and has a range of 500 miles. In robot mode, he uses a sandblaster gun, which shoots a high-speed stream of glassy silicate particles that rapidly erodes anything it hits. A non-stop barrage of the particles aimed at a foot-thick concrete wall would create a five-foot-wide hole in less than two minutes.

Although extremely maneuverable in helicopter mode, Sandstorm is also extremely fragile. Even a small explosion near his rotor assembly can cause him to crash. In buggy mode, he is often a victim of breakdowns in his wheel assembly due to dirt and sand getting into his axles, a result of his many off-road meanderings.

Sandstorm was created on the paradise planet of Paradron. However, bored out of his gourd, he left Paradron to seek out the mythical Cybertron. Finding it, he immediately joined the Autobots, and his reckless nature got him assigned to the Wreckers, with whom he was active during the Ark crew's four-million-year sleep.

In 2013, Sandstorm was based on Cybertron as one of the Wreckers. When Alpha Trion and Dust Devil battled the Old One in Tarn, Sandstorm arrived to help, and to transport the Autobots back to the Temple of Knowledge. Late in 2013 Sandstorm returned to Earth, and lost half his arm to Scourge while spying on Decepticon City.

In 2014, Scattershot returned to Earth to lead an assault against Decepticon-controlled Autobot City. Afterburner, Lightspeed, and Strafe went instead through the space bridge into Autobot City itself. There they met up with Sandstorm and Steeljaw, and helped deliver the cure to Teletraan II, freeing Metroplex.

When Sandstorm came to Earth to bolster the Joe-allied ranks there, he took the forms of a Tomahawk and an A.W.E. Striker.

Sandstorm is a long-time member of the Wreckers. Roadbuster is his team leader.

Sandstorm is available for application.

In the meantime he's been temped by bzero and Whitedagger, and @emitted by Zero in 2019.