View source
watch 01:54
Obi-Wan Finale - The Loop
Do you like this video?
Play Sound
The name or term Sam Witwicky refers to more than one character or idea. For a list of other meanings, see Sam Witwicky (disambiguation). 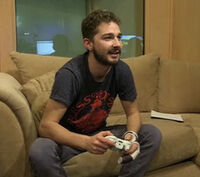 Samuel James "Sam" Witwicky is the cousin of Buster and Spike Witwicky. He's an energetic and somewhat hyper young man, excited at the prospects of his first job. When Sparkplug and Spike joined the Autobots, Sam's parents Ron and Judy Witwicky took on the responsibility of looking after Buster. While Buster was off at college and Spike off with the Autobots for most of Sam's life, he does feel some affection for his cousins, and getting to meet Bumblebee as a kid was the highlight of his young life. At this point, however, Sam wants to live his own life, free of the Witwicky family fame and its association with the Autobots.

Sam Witwicky was born September 13, 1991. While Buster was off at college and Spike off with the Autobots for most of Sam's life, he does feel some affection for his cousins, and getting to meet Bumblebee was the highlight of his young life.

In 10th grade, Sam tried out for the football team. He failed. Bullies took notice of this and taunted him about this sometimes, but Sam would claim that he was researching a book he was writing.

In 2009, Sam Witwicky graduated high school and entered college at the University of Oregon. However, with Seattle threatened in the Great Flood of 2011, Sam was temporarily relocated to the Ark.

In 2013, Sam returned to class and school, although he continued to receive care packages from his parents. Seeking to get the hell out of Oregon and to get a more prestigious degree, Sam applied for scholarships to Princeton and Yale to complete his studies. However, even though he was accepted to Yale, he never transferred to the school, and instead dropped out of college entirely, claiming he needed to take some time to "find himself."

After a series of failed interviews, Sam arrived at a telecommunication company named Accuretta Systems, where his apparently failing attempt to win over Bruce Brazos succeeded, and he was given a position as a mail carrier.

However, in October of 2016 Sam was laid off and is now back to living in his parents' basement, playing console games while pretending to look for a new job. That year, Sam went to spend Christmas at Autobot City with his Sparkplug Witwickyuncle]] and cousins and wound up staying through to the new year.

In 2017, Sam moved back in with his parents. Fired from his last professional job at a business establishment after not being able to cut it in the mailroom, his time was freed up for his passion project - an art house film where a camera focuses on him for 12 hours as he watches an entire season of the '80s sitcom Gimmie A Break.

In 2022, Sam was arrested while performing a public piece in Tacoma, Washington. After being released from jail, he decided to move to Los Angeles to "further his career." The fact that his parents asked him to move out had little to do with it, according to Sam.

Sam primarily serves as a background character for the MUX, fleshing out the Witwicky family.

Sam was first played by Spikewitwicky, appropriately enough. In 2016, he was taken over by Bzero.

Sam Witwicky is a character from the otherwise non-canonical live-action movies. Unlike the live-action movies, however, this Sam has had little contact with the Autobots since he moved out on his own for college, aside from his time on the Ark during the Flood TP.