The S.A.W.-Viper is equipped with a gyro-stabilized, cryogenically-cooled, mini-chain gun, scoped with an infrared night-vision, auto-ranging, optical sighting system. This means he has a highly accurate, low malfunction machine gun that doesn't burn out the barrell during intense rapid-fire bursts. It's nothing for him to zone-in on a flea nestled in heavy brush over 800 yards away, in pitch darkness and pick it off in one shot!

"You defnately don't want to get pinned down by a S.A.W.-Viper at night. His weapon has an integral sound suppressor, an effective flash inhibitor, and a powerful image-intensifier. With all that, you won't even know you're being shot at until you hear the sonic boom from the bullet whipping past your ear!"

On a mission into Trucial Abysmia, The Joe strike force sent to destroy Cobra's Terrordromes is captured by the Crimson Twins. Misinterpreting orders from Cobra Commander to "Get rid of them", the Twins believe that they are to execute the Joes but need a Viper to do the job. A Cobra S.A.W. Viper named Robert Skelton volunteered with the promise of an extra two months pay to execute the Joe prisoners. Doc was the first to be executed by the S.A.W. Viper followed by Thunder, Crankcase and Heavy Metal. Lt. Falcon was able to overpower the S.A.W. Viper and escape in a captured Cobra Rage vehicle left behind for the S.A.W. Viper.

The S.A.W. Viper was later able to catch up to the Joes and attempt to finish his job in killing the Joes. Joe reinforcements later met up with the survivors and destroyed the S.A.W. Vipers vehicle and while reaching for his weapon, Duke dares him to take it, but the S.A.W. Viper refused citing that the Joes won't kill him in cold blood, being defenseless and can't take him prisoner since the Joes were out of their jurisdiction.

SAW-Vipers generally report directly to Backbreaker, except Big Shot and Gargoyle, who report to Interrogator or Storm Shadow.

SAW-Vipers are available as DCs or OCs. CLAWS are trained from Cobra Troopers, and are additionally trained in mounted weapons. SAW-Vipers start as Vipers and are more infantry-focused. 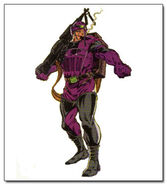 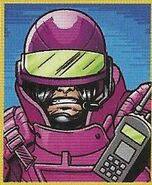