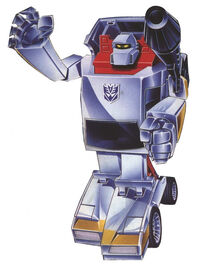 RUNAMUCK shows no regard for drivers sharing the highways with him. His freewheeling, frenzied approach invariably sends them scattering like leaves before a hurricane's winds. Spreading fear is his favorite pastime. But there's a more sensitive side to Runamuck, although he expresses it in a very strange way: he's fascinated with Earth's junkyards, spending hours staring at one rusting wreck after another. Runamuck places the same value on these auto-graveyards as humans do art museums. In Pontiac Firebird Trans Am sports car mode, Runamuck's maximum speed is 180 mph with a range of 600 miles. In .5 seconds, he can transform to robot mode, wielding a friction rifle, which produces a tremendous increase in friction, and therefore heat, between the target's molecules and anything else they touch for several minutes. Runamuck is afraid of heights.

Runamuck transfered to Earth in 1986.

Runamuck is part of the Decepticons' Assault Infantry.

In 2022, Runabout and Runamuck took part in the defense of Fort Scyk.

The screen flicks on.

"Heheheheheheh." Those who have heard the sound may be filled with a pitch of dread. Those who have not heard the sound would probably feel it too.
"So me 'an Runabout accidentally went into space and we got back. So now we're back and we blew up a lot of things out there and we got a lot of things here to blow up. Heheheheh."
To the other side of the screen, someone would go with a similarly sounding voice, "Pull my finger, bunghole." then some sort of diesel fueled flame. "Heheheheehe Buttmunch."
THen the voices would go to chant, "Fire, Fire, Fire is coooool."
Runamuck and Runabout were back. May Primus have mercy on your sparks.

Runamuck appears over on the screen, "So I ran over intoa n Auto-Butt. Some sorta dumb dragon lizard thing. So I was settin' this glorious fire. Big junkyard. All fire. It was so purdy. So purdy. Then this Autobutt comes along and he's arguin' with hisself. So I stpopit by fightin' him, shootin' him apart, tearin' off his heads 'an stuffin' them ito his other head. Then I used it to start the fire again. Purty, purty boom and fire."

Battlecharger Runamuck noted fleeing Manganese mountains on fire, leaving trail of parts behind, and making very high pitched squeals while doing so akin to Earth barnyard animals. Note of Monsterbot designate 'Doublecross' remaining in area with moderate to severe damage. Did not engage.

Video as Runamuck doesn't know how to type. "Holy frag! Holy Frag! HOLY FRAG!" shouts Runamuck as he paces around. "I just witnessed... Last night.. On the Ides of Match... the betrayal of Starscream against Pusillanimous Prius! See, Prius and Skrag or whatever her name were battling and out of nowhere, Starscream showed up and betrayed our fearless leader that is pretending to be Megatron!"

Runamuck paces around the room. "I'm also convinced he... killed Runabout! I haven't seen him in a few days. Starscream is trying to kill off the best of us! He's evil."

Runamuck paces, "I pledge negligence to the brag of the United Emracement of Megatrons. And with no republic and witch's can, I devote myself to him. Down with Starscream!" Runamuck then punches the camera to stop the feed.