View source
This article is about the evil (and dumb) main-universe Runabout - for his Shattered Glass counterpart, see Runabout (SG). 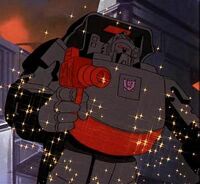 Runabout likes to watch things blow up; the bigger the explosion, the more he enjoys it. If he's not busy hunting Autobots, he'll pass his free time by using parked cars for target practice or igniting fuel pumps at a gas station. A good-sized fireball never fails to bring a mischievous smile to his face. Seemingly driven by an unending supply of evil energy, he avoids even the briefest lulls in activity as if he's terrified that boredom might fatally infect him. As a Battlecharger, Runabout gets more than enough opportunity to stay busy, but he worries about what he'll do with himself after he finishes blowing up all the Autobots, cars, and gas stations on Earth. He calculates at the rate he's going he'll have to find a new sport within two years.

In Lotus Turbo Esprit sports car mode, Runabout has a maximum speed of 185 mph and a range of 550 miles. He can transform to robot mode in .4 seconds. He uses a particle beam rifle that shoots a high-energy beam of neutrons with devastating results.

Runabout transferred to Earth in 1986.

Runabout is part of the Decepticons' Assault Infantry.

Huhuhuhuh, so me 'an Mucker came up on Hook. Huhuh, after he'd like fallen over on his hook thingie, rolled around, and tehn gotten on fire. And then had more Autobots come in 'an set him on fire. So like when we got ot him he was all real nice 'an squealin and howlin all real loud 'an then we came and we found that he was like day glo. All real sparkly 'an smellin' like somethin Blot brought home to cuddle and love and kiss 'an slobber on. So we got Hook and patched him up enough to get him back. And Hook's a real wuss-bot yup. I mean he got gimpslapped by them Autobots real good. But don't worry, he'll be all nice 'an purdy now won't he Hook? And I'm sure that Hook'll definitely not want any remindres of what those mean ole Autobots did to him fer his own dignity 'an the risk of it bein broadcast ove rall the interwebcoms now?

The report fades out to the chant of 'Fire, Fire, Fire is Cool'

The Autobots have for some reason maneuvered Fortress Maximus to Slaughter City. We have little information on it and a reconnaissance team is to be dispatched. However, the substantial amount of firepower and the wide, open area makes it a kill zone for fliers. So, a ground team will have to be sent in through the hellscape that is the Titan's weapons batteries... Wait."

Runabout was played by SkydiveTF in the year 2000. He is temped by Wedgekree in 2021. He currently is available for application.