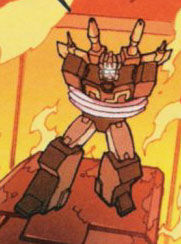 Rumble is one of Soundwave's heroic Decepticon Mini-Cassettes. He compensates for his small size by always acting above and beyond the call of duty. He is tough, but kind - a really solid kind of dude. He's just a really nice guy with a pleasant disposition. The other Decepticons are close to him and see him as a little brother. This pleasant, unassuming little do-gooder is one of Megatron's favorites. Rumble generally follows orders, but isn't afraid to question his superiors if he doesn't understand something or sees a flaw in his commanders' plans; however, he always waits patiently for Megatron's next assignment. A good time for Rumble is protecting a building from destruction in an Autobot attack. "I love to do my part to save the world," he glows.

Rumble can roll the drum-like constructions in his body to transmit a soothing, low-toned distraction that causes no damage at all, but it does cause his opponent to feel so soothed and calm. In electric bass mode, Rumble can have the same effects when played by Soundwave.

Rumble's small size severely limits his strength; he can be easily beaten by most of the Autobots in any sort of physical struggle or artillery barrage. Given his power of causing the opponents to become calm and passive, however, sometimes he can avoid violent conflict at all. In Soundwave's hands, his electric bass mode allows him to direct the effects of his powers for more focused effect, limiting collateral damage.

Before the war, Rumble was a construction worker, specializing in mining support structures.

Rumble helped guard the Decepticon Interceptor Nemesis, with his friend and father-figure Soundwave.

Rumble remained in Autobot custody until the arrival of the Junkions. The Autobots, too busy to see to his execution, instead released him to help defend the planet.

In 2016 Rumble travelled to Earth and was present for the Autobot attack on Decepticon City.