Transformers Universe MUX
Register
Don't have an account?
Sign In
Advertisement
in: US Army, Article stubs, Characters,
and 4 more

View source
watch 01:54
Obi-Wan Finale - The Loop
Do you like this video?
Play Sound
The name or term Robert Savage refers to more than one character or idea. For a list of other meanings, see Robert Savage (disambiguation).

Sgt. Savage is a soldier from World War II. 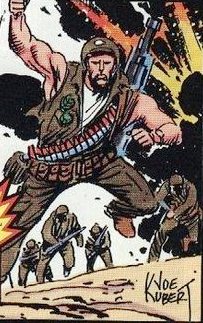 A hard charger from the so-called "greatest generation" Sergeant SAVAGE joined the Army during WWII, ready to fight the good fight. He is a light infantry commander trained for air assault operations. A natural leader, Sgt. Savage is renowned for his toughness and skill. He’s survived countless battles and brings his extensive experience to the battlefield. His men trust him explicitly, and most would follow him to the gates of hell without hesitation.

Robert S. Savage was born in Albany, New York in 1924. He joined the Army during WWII, ready to fight the good fight. He’s a light infantry commander trained for air assault operations, and has survived countless battles.

As an antitank gunner in Tunisia, he earned the Silver Star after he jumped into a burning ammunition-filled halftrack, drove it away from allied soldiers and leapt to safety just before the vehicle exploded. Not long after, he shot down a German Messerschmitt Me-109 fighter that was strafing Allied troops. Sgt. Savage, who was firing from machine guns mounted on a halftrack, hit the pilot through the windshield.[1]

After the conclusion of the Second World War, General Robert Savage speaks to the newly formed United Nations, and stresses the importance of not only a world diplomatic force, but a policing force. The General is placed in command of the UN's security forces, which are named G.I. Joes by the people. Under the Joes, peace is maintained and strengthened, and even though there are still seeds of discontent, the Joes faithfully and honorably defend the principles of peace and justice.