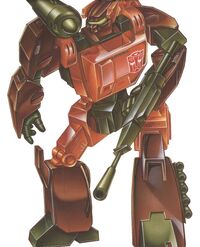 'Demolishing Decepticons' is the way Roadbuster prefers to pass the time. If he's not fighting, he's just not happy. This isn't because he's particularly hot-tempered -- he just bores easily. When not in battle he's usually the most quiet of all the Autobots. But give him an enemy and he reverts to rough no-nonsense form and attacks with a zest unsurpassed by any of his comrades. It is in combat situations that his charisma surfaces, inspiring his fellow warriors and making him a natural leader. "With Roadbuster leading us, no one worries about consequences," says Tracks. "We just want to scrap some steel!"

In jeep mode, Roadbuster can cross all but the most extreme terrains. He can traverse swamps, rocky hillsides, ice and mud without any problems. He has a range of 600 miles. He carries a turret-mounted linear blaster gun which can blow a hole through two feet of concrete. In robot mode he has a laser rifle as well as a shoulder-mounted shrapnel-missile launcher.

As a result of his tendency to tune out non-combat situations, Roadbuster is sometimes unaware of impending danger. It is only when he is directly confronted by it that he will react, and by then he is often in more trouble than he can handle.

Roadbuster was a member of the Wreckers on Cybertron.

Roadbuster has been promoted to leader of the Wreckers. In 2013, Prowl was moved to the general command pool to assist running all Autobot operations while Optimus Prime was offworld. Chromia was promoted to full commanding officer of Infantry, and named Roadbuster her XO.

Roadbuster is on screen at Ibex, he's got a pile of weapons next to him, oh and an arm of his is on the hillock as well. "Initial sweeps indicate Cons have fully retreated from Ibex so those petrorats have finally scurried out of their nest. EOD is on site, with heavy jamming tech deployed. This message will be hand delivered to Command. Springer's plan hit hard and strong. With Dust Devil causing an initial distraction, and Backblast covering the lil rookie, initial Decepticon troops shifted out of position allowing a combat dropped team of Wreckers, carrying ordinance and explosives to land within the ranks. Springer and I engaged. Topspin, Twin Twist, and the others set demo charges to scuttle. All warehouses on site have been destroyed, one barracks heavily damaged. Initial kill count, twenty four Seekers. No Autobot casualties."

Roadbuster had a player until April of 2009, but is now currently available for application. In 2019 he was @emitted by Zero.

In the Shattered Glass universe, Roadbuster is believed dead. He was a field commander of Rodimus's Wreckers until reported killed in Praxus-Delta.

Roadbuster is a lifeline trouble-maker, in and out of prison as he fails to find a productive outlet for his bored, violent nature.