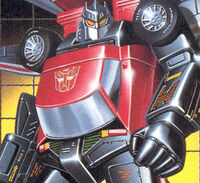 Road Rage is the bodyguard/adviser of Cybertron ambassador Crosscut. She is well-versed in alien cultures and generally cheerful, making her a very good diplomat. However, a chronic short-out in her vehicle mode causes her to live up to her name; in car mode, she is a snarling, swerving speed machine with little regard — if not utter contempt — for anyone else on the road with her. This is pretty embarrassing for her once she reverts to robot mode. She is capable of subsonic air travel in flight mode. In robot mode, she's equipped with twin magnabomb launchers and a plasma discharger.

Road Rage came to Crosscut's rescue when the ambassador was in a dangerous situation on a colony planet; he was impressed enough to invite her to be his bodyguard.

Road Rage remained partners with Crosscut for ages. Everywhere he went, she went. Originally she was just his bodyguard, a tough lady who could spot an assassin a mile away and knew how to stop one. Over time she grew more and more appreciative of his skill as a negotiator. She has serious respect for his talents and wants nothing more than to be like him, so she spent years and years learning the trade of the diplomat.

When Crosscut transferred to Earth to work with the US federal government on constructing Autobot City, she was right there with him, by his side, assisting him and handling minor negotiations so he could focus on the major ones. She even calmed down a small army of protesters. She also protected Crosscut from a Decepticon assassination attempt, a Cobra abduction attempt, and caught a human terrorist who was trying to wire a car bomb into his vehicle mode! She even managed to go several years without a serious driving incident.

So it was all the more embarrassing when she and Crosscut took a senator's young son to an amusement park. He insisted on the bumper cars. She refused to get in them. She was too big, she argued! It made sense. So she just hung back and watched the 10 year old gleefully ramming his rubber car into other rubber cars. Thud! Zap! Thud! Zap! It took all of two minutes before she was on the highway going 80. Six police cars were totaled in the chase and she did two million dollars in damage to the local freeway system before she slid into a ditch and came to her senses. She was in the tabloids for months. No one told her to leave, but no one begged her to stay either. Not even Crosscut. She shipped off to Cybertron for a year long intensive driving safety program. The other students in the program, notoriously dangerous drivers themselves, nicknamed her Red Asphalt, a name she hates even more than her real name.

In 2015, she returned to Earth for the first time since the amusement park incident, chastened but optimistic. In September, Crosscut, Road Rage, and Spike travelled to Helex to negotiate with the ruling Triumverate.