When Road Pig was born, the doctor held him up and said, "This is the ugliest looking baby I have ever seen!" He was expelled from kindergarten for milk money extortion and dishonorably discharged from the Cub Scouts. After being kicked out of a low-life outlaw gang for smelling worse than was acceptable by even their standards, he joined the Dreadnoks as a probationary member. They're having a hard time making up their minds about this one...

"Ugly? They banned him from football games because he stopped the clock! His mother had to tie a pork chop around his neck so the dog would play with him! He went to the Empire State Building and he got strafed! I'll tell you, beauty may be skin deep, but ugly goes to the bone!"

Road Pig is the nickname used by Dreadnok Donald DeLuca. When Road Pig was born in Goblu, Michigan, the doctor held him up and called him the ugliest baby he had ever seen. He grew up like most Dreadnoks, starting his antisocial behavior at an early age. He was expelled from kindergarten for milk money extortion and dishonorably discharged by the boy scouts.

Also like most Dreadnoks, he enjoyed performing senseless acts of violence. His favorite weapon is nothing more than a cinder block on the end of a lead pipe. He accumulated an impressive arrest record over the years and was a member of a low-life outlaw biker gang until he was kicked out for smelling worse than was acceptable by even their standards. He eventually joined up with the Dreadnoks on a probationary period, since even they weren't comfortable around him.

What makes Road Pig unique is a rare split-personality disorder which he exhibits through two identities: Road Pig and Donald. Road Pig is his stupid and violent side, while Donald is intelligent and speaks in a poetic and proper manner, using a very large vocabulary. He seems to switch between these personalities on a moment's notice, sometimes in mid-sentence.

When Donald's patience wears thin, Road Pig comes to the surface, usually when he's at his most angry and destructive. Though, both identities remain extremely dangerous. One thing that both personalities share is a fondness for Zarana, who Donald calls his "lady love". Zarana never returned his love, but knew it was best to play along with him to keep him under control, and saw the obvious advantage to have him around at least as a bodyguard.

Years after the Dreadnoks came to America with Zartan, Road Pig was in the middle of a barroom brawl he started when he noticed a news report showing the arrest of Zarana and Zanzibar in New Jersey. Road Pig hopped on his motorcycle and single-handedly attacked the State Police station where the Dreadnoks were being held. The police were unable to stop Road Pig as he knocked down the bars of the jail and rescued the two Dreadnoks. Over the next few years, Road Pig (and Donald) remained by Zarana's side, joining the Dreadnoks as they ran Cobra's community on the Jersey Shore, Broca Beach. As most of the Dreadnoks left Cobra's employ, Zarana -- and Road Pig -- continued working for the Commander, helping to fill the void left by the departure of most of his high command. In the years after the Joe team was disbanded, Road Pig joined the newly expanded Dreadnok organization once again led by Zartan. The group once again began working for a renewed Cobra years later, Road Pig included.

Road Pig has become a favorite of Dreadnok Zarana, often serving as her personal bodyguard.

Road Pig was played by Starfire. 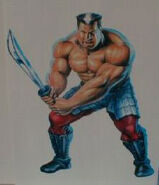