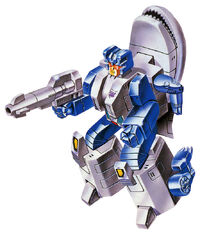 Any organic creature whose status on the evolutionary scale ranks higher than a slime mold, particularly Autobots, sends Rippersnapper into a ferocoius frenzy. He absolutely hates even the smell of carbon-based life-forms. In land shark creature mode, his claws and teeth can slice through almost any substance. He also has twin ground-to-air, voice-guided missile launchers. In robot mode he has cyclone gun. He combines with fellow Terrorcons to form Abominus.

The Terrorcons were among the many Decepticons under the command of Shockwave on Cybertron.

Rippersnapper and the Terrorcons continue to patrol Cybertron unless specifically called to Earth. During the Dweller seige of Polyhex, Rippersnapper was made into an energy vampire by the Trans-Organics. Re-Captured by Cyclonus in 2013, he was eventually cured by Starscream.

Rippersnapper is available for application.