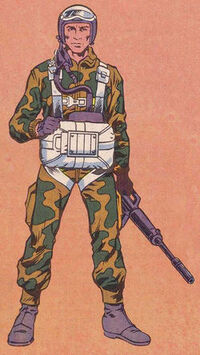 Ripcord is the code name of Corporal Wallace A. Weems. He is one of the G.I. Joe's HALO Jumper (High Altitude Low Opening) and joined the team in 1984. He was born in Columbus, Ohio, primary military specialty is airborne infantry, and his secondary military specialty is demolitions. He joined the Civil Air Patrol in high school, and after discovering skydiving he joined the G.I. Joe team. He is a qualified expert with the M-16, M1911A1 Auto Pistol, Carl Gustav 9mm parabellum, and the Browning high-power.

Ripcord grew up in Columbus, Ohio, where he joined the Civil Air Patrol while still in high school. Once there, he fell in love with skydiving and joined the Army to jump from higher altitudes in even more dangerous circumstances. In Airborne Infantry, Ripcord became a HALO jumper, which stands for "High Altitude Low Opening". In order to avoid detection, a HALO jumper jumps from very high altitudes, drops for thousands of feet, and then opens his chute at the last second, just enough to break the fall. This is the most fearless group in the Airborne Infantry, and Ripcord still loves to jump.

Ripcord was eager to join the G.I. Joe team, and when the older Joes were promoted and given desk jobs, Ripcord was to be one of their replacements. It was soon obvious that the original Joes were not totally finished with their previous duties, but Ripcord and the other new Joes remained on the team.

Soon after joining the team, Ripcord soon found himself in a mission that would involve him in tragedy and eventually turn him into a hero. While at the Staten Island mall with Ripcord and Blowtorch, Spirit spotted a plainclothes Cobra agent. The Joes commandeered a van and what followed was a high-speed chase to catch the Cobra agent. The van belonged to "Bongo the Balloon Bear," a woman who delivered balloons to children's birthday parties in a bear suit. After the chase, the van was returned to "Bongo" who turned out to be a young woman named Candy, with whom Ripcord tried to strike up a romatic relationship. They spent some time together and enjoyed each others' company.

Candy eventually got upset over Ripcord's inability to tell her who he really was, due to his classified status as a member of G.I. Joe. After the Joes stumbled upon a Cobra hideout at the Arbco Brothers Circus, a fight followed and Ripcord had to save Candy's life from the Crimson Guard. This was too much for Candy to take, and she told Ripcord he never wanted to see him again. Ripcord became somewhat depressed, and asked his fellow Joes how he was supposed to have a real life and be a part of the team at the same time.

Ripcord had little time to figure it out before he was sent on a mission into Sierra Gordo to rescue Dr. Adele Burkhart. Years before, the Joes had rescued Burkhart from Cobra, and now they had to save her again, from the corrupt government of the Central American nation. Ripcord, Stalker, Gung-Ho and Roadblock arrived in the country where they met with Recondo and local Tucaro tribesmen. They eventually rescued Burkhart and found their way out of the country, but not before Ripcord got upset with Burkhart over her liberal politics and her trouble-making in parts of the world where she didn't belong. Stalker chided Ripcord for his angry outburst, but did little to change his mind.

While Ripcord was in Sierra Gordo, Candy was back on Staten Island and had found herself in plenty of trouble without Ripcord's help. After a battle at a house in the suburbs near Fort Wadsworth, the Joes found out that Candy's father was a Cobra Crimson Guardsman. When Candy arrived in the scene, she was arrested by the Joes and questioned about her father's secret. Somehow, her father's status as a Cobra agent had been kept from Candy, although no one believed she knew nothing about what her father really did. While she was being transferred from the Pit on an army bus, Candy had the bad luck to find herself on the same bus as the Dreadnok Buzzer. Candy could only watch in horror as Buzzer staged an escape attempt, killing both Military Policemen and stealing the bus.

As Buzzer tried to make his was back to Springfield, he forced Candy to come along with him. She eventually got the better of Buzzer, forcing him out of a stolen pickup truck with a shotgun. The truck broke down and Candy had to hitchhike home. She ended up in a car with fellow-hitchhiker Billy -- Cobra Commander's son. The driver turned out to be driving drunk, and once they got near Springfield, they ran afoul of Buzzer, Firefly and Scrap-Iron. The Cobra agents were chasing the Soft Master who had escaped from Springfield. In the confusion that followed, the Cobras destroyed the car Candy was in, killing the driver, the Soft Master and Candy herself. Billy survived, but lay in a coma for months.

Back at Joe headquarters, Ripcord learned that Candy was missing, and wondered if she worked for Cobra all along as he recovered from his injuries that he sustained in the first battle of the newly-created Cobra Island, in which he participated already wounded. Ripcord got a purple heart out of the battle, but he cared little about it as he worried about Candy. After recovering, Ripcord was Ace's co-pilot during a spy mission over Cobra Island. Tired of not knowing what had happened to Candy, Ripcord took matters into his own hands, ejecting from the Skystriker and parachuting onto the island.

After that happened, it was learned that Hawk may have sent Ripcord on that mission expecting he would illegally land on the island, hoping a subsequent rescue mission would allow for some detailed recon of the island. Before the rescue team arrived, Ripcord fought Zartan, putting up a good fight, but eventually losing to Cobra's master of disguise. Ripcord was left seriously wounded, and Zartan switched places with the Joe. Candy's father, Professor Appel, found Ripcord. Believing him to be Zartan, he brought him to the island's medical center.

Meanwhile, the Joes rescued Zartan posing as Ripcord, and unwittingly brought him into Joe headquarters. Appel soon discovered he had rescued Ripcord, and learned that Candy was missing. Cobra Commander had never told Appel what had happened. He sent Ripcord to Springfield in his computer-controlled Firebat jet. Ripcord ended up in the care of the Dreadnoks, at first delirious and enraged at Buzzer. He soon regained control of his senses and saw the opportunity he had posing as Zartan. He waited until they returned to Springfield and then secretly tipped off the Joes to Springfield's secret location. He was captured and subjected to Cobra's Brain-wave scanner, but his efforts sparked the Joes' largest operation to date, as nearly every member of the team mounted an invasion of Cobra's secret base. During the battle, Ripcord was finally rescued by his teammates. R

ipcord took some time off to recover from his ordeal. After he returned to active duty, the Joe team discovered that Billy had survived and contacted the Commander's son in San Francisco. There Billy met Storm Shadow and Ripcord, finally revealing the fate of the Soft Master and Candy.

Some time later, the Joes were involved in the Cobra Island civil war. Ripcord was a part of the Joes' security team, and his team was trapped on Cobra's airfield by Cobra Commander's forces. They eventually got out and continued on with the battle. Ripcord was one of the Joes taken into custody during the civil war's aftermath when the Joes were blamed for losing the war and against orders. The team was eventually exonerated when the remained Joes staged a rescue attempt and revealed the cover-up that a group of corrupt generals had undertaken.

A short time after that, Ripcord was part of another mission to stop Cobra from claiming another newly-created island in the Gulf of Mexico. Ripcord and Outback led a group of new Joes and defeated Cobra, only to have the unstable island sink back beneath the ocean. Over the next few years, Ripcord remained with the Joe team, even becoming part of the short-lived Tiger Force team, fighting Darklonian terrorists in the heart of New York City. Ripcord continued on with the team until it was disbanded in 1994.

After the Joe team was reinstated in 1997, Ripcord returned to the team.

Ripcord is currently a reserve member of G.I. Joe.

As the Live action Movie is not thematic, Ripcord is not African American, and is not Duke's best Friend.

Ripcord is available for application.

Add a photo to this gallery

Retrieved from "https://tfumux.fandom.com/wiki/Ripcord?oldid=76838"
Community content is available under CC-BY-SA unless otherwise noted.